This was the first and last time I saw my neighbor Bill drive his 1928 Ford Model A Coupe. He was taking it for a farewell spin, honking its ooga ooga horn.  The coupe has been sitting in his garage for more than two years, and now he’s sold it.  It was no longer a thrill for the youngest grandkids — now young teenagers — to putt around the town.  In a decade, they’ll miss the old car.

The first day the ad ran, a man from Bonner Springs bought the car.  The new owner restores Model As and corvettes, and Bill predicts that after the new owner shines and improves this Model A, it’ll bring an even more handsome price than he had to pay.  The cheapest Model As rolled off the assembly line for $385.  Now these antiques command many tens of thousands of dollars. 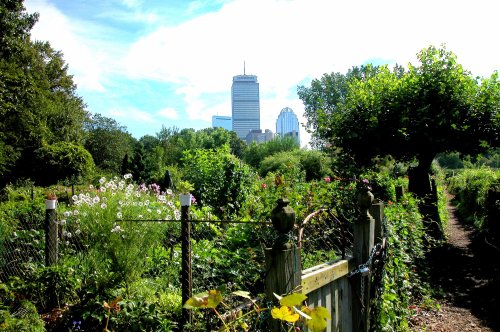 Article about gardening books from the New York Times

As a college student, my daughter lived along Boylston in Boston in one in a row of old apartment buildings. The woodwork was thick with paint, the walls were peeling, the plumbing leaked.  The floors were stained, and the sink was rusty.  One night she had to stay up to bail water from the tub because it wouldn’t drain nor would the tub faucet stop leaking.

From her windows on the back of her building, my daughter could look into Fenway Park baseball stadium.  Her blinds couldn’t block the glow of the lights, and she heard the roar of the crowd at every game the Red Sox played — this was 2007, a year when the Red Sox won the World Series, so there was a lot of roaring. Every

home game was sold out.  The streets were jammed.  Unfortunately, she wasn’t a baseball fan…..

Still, her neighborhood did have one glorious aspect.  The front of her building faced the Fenway Victory Gardens.  I appreciated the gardens more than she did.   She rushed past them to and from her classes at the Berklee College of Music.  The weather was usually bad.  She’d heard rumors about the strange activities along the fens that bordered the gardens to the east, some of which we saw for ourselves.  Men strode back and forth, hands in their pockets, along the tall rushes.  Here and there, short paths had been beaten into the rushes. “They find bodies there,” she said.

I loved the gardens, which I could appreciate as a summer-time tourist and a gardener myself. I wasn’t in a rush and no one bothered me as I wandered the paths, while gardeners worked quietly in their plots.  On some of the narrower paths, I stepped over used condoms and cigarette butts, which hinted at the different kind of visitor the gardens attracted at night.

The Fenway Victory Gardens represent the nation’s last remaining of the original victory gardens created nationwide during World War II, according to its website. www.fenwayvictorygardens.com   During World War II, because of the needs of the troops in Europe and the Pacific, there was rationing and shortages for those on the home front.  President Franklin D. Roosevelt called for Americans to grow more vegetables.  The City of Boston established 49 acres, including the Boston Common and the Public Gardens, as “victory gardens” for citizens to grow vegetables and herbs.

The Fenway gardens are on seven acres of the Fens, one of six Boston Parklands designated as the historic “Emerald Necklace” by celebrated landscape architect Frederick Law Olmstead in the 1800s.  The gardens have more than 500 plots, each about fifteen by twenty-five feet.  More information is on the website listed above.

“A Latter-Day Gehrig Survives, and He Demands to Be Heard,” link to a story about ALS from the New York Times

A few people you meet will have a huge impact on your life, even when you don’t realize it at the time.  Keith Worthington was such a person.  I met Worthington in 1982.  His courage and dedication greatly affected me, but I had no idea then how his mission would later be so important to my family.

I was assigned to write a news release about a new center for a disease I knew little about: ALS. Frankly, at the time I was glad that meeting him was just part of my job.  I was grateful not to have any personal acquaintance with the disease he was fighting.     I’d heard the story about Lou Gehrig retiring from baseball years ago because of a paralyzing disease that was later named after him, but when I met Worthington I saw the full expression of that disease. Worthington was totally paralyzed and on a ventilator. ALS is a terrible, progressive neurodegenerative disease, and there isn’t a cure. Yet, he radiated cheerfulness.

Worthington was at the University of Kansas Medical Center, where I worked, to help open a new ALS Research Center.  When he was diagnosed, he found little help or information anywhere, and he created, with his wife Sue’s help, an organization to help people with ALS and to raise money for research.  That organization, which later joined the national ALS Association, is 30 years old this year and is named the Keith Worthington chapter.  It’s one of more than 40 ALS Association chapters nationwide.

Worthington died two years after I met him, but I didn’t forget him or his courage to help people even when he knew he would never benefit himself.  When my father was diagnosed with ALS in 1995,  I felt punched in the gut, shocked, in denial.  I immediately thought of Worthington and knew the fate that awaited my father.  But I also knew that because of Worthington, there were care, support and equipment resources available to my father.

The Keith Worthington chapter has many devoted supporters, including baseball legend George Brett, who was Worthington’s friend, and golf legend Tom Watson, whose long-time friend and caddie Bruce Edwards died from ALS.