Trees somehow manage to grow in deep sand and shade in this courtyard of sandstone "fins" in Arches National Park, Utah. The wind rushed through, blowing the sand into our eyes, eyes and mouth.

This is my second post about southern Utah.   It’s just too awesome to be covered in one post, and you may see more about it in the future…..  The link to the first “Awesome Utah” post is at the bottom.  It contains details of the journey, links to websites and a variety of fascinating facts. You can also scroll down to find it.  This post is mostly photographs in no particular order.  See below for a link to a collage card I made of nine Utah iconic views.  Utah Collage Card from Zazzle.com All photographs are copyrighted.  Some are available as greeting cards and other products at “It’s a Beautiful World!”

These geologic features in Arches National Park are known as fins. 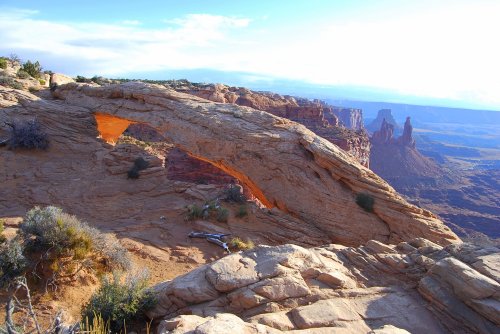 We hiked just after sunrise to Mesa Arch in Canyonlands National Park. 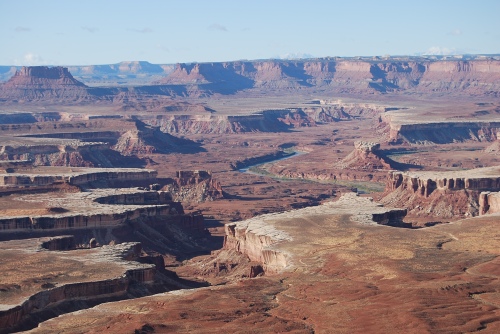 A lizard seeks shelter from the sun (and me!) in Arches National Park. I think it's a "common sagebrush lizard."

I walked about a mile round-trip through blowing sand to get this shot of Broken Arch. See what I do for you! Broken Arch, which is in Arches National Park, isn't really broken, as you can see. Not broken yet, anyway.

Why did the cow cross the road? It was looking for something good to eat. Good luck! Cattle wander the open range in Utah, so motorists need to be wary. 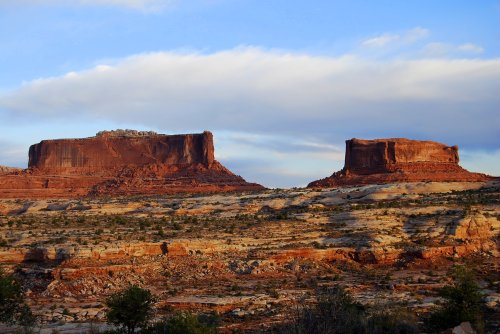 The Monitor and the Merrimack, just north of Canyonlands National Park, are two buttes named after "iron-clad" ships that battled each other during the Civil War. 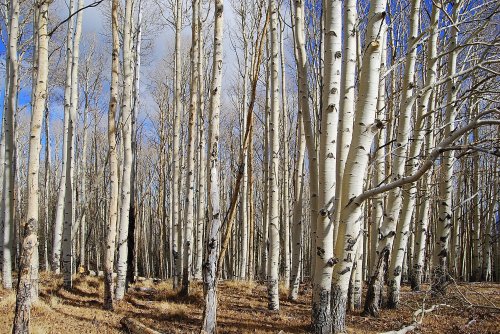 This grove of aspens is near Canaan Peak, elevation 9,196 feet.

The terrain changes quickly and dramatically in Utah.  Near mountaintops, aspens and evergreens take over from shrubby cedar and sagebrush.  In early November, when we visited, all of the aspens had lost their leaves.  According to the December 2008 issue of Smithsonian Magazine, aspens are suffering “sudden aspen decline” in Colorado, Wyoming, Utah and elsewhere in the Rocky Mountains.  We didn’t see any sign of that, but it would have been hard to tell whether the aspens were in an early state of disease or insect infestation.

Aspens grow in “clones,’ or groups of genetically identical trunks, Smithsonian reported.  Some clones are thousands of years old, but the individual trees usually don’t live longer than 150 years.  Scientists have confirmed that a clone of aspens in Utah covered 108 acres and is thought to be the world’s heaviest, largest or oldest organism.  This particular clone is known as “Pando,” after the Latin for “I spread.” 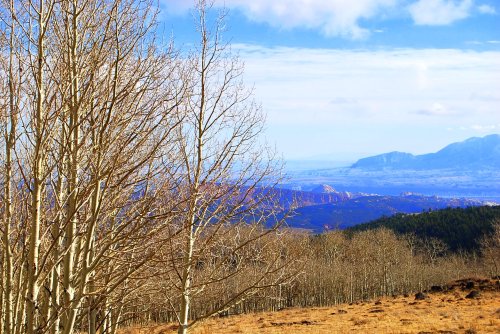 These aspens stand at the crest of a mountain near Canaan Peak in Utah. Beyond are row after row of more mountains to the east.

We climbed a trail to a series of three pools fed by springs in Zion National Park. A Zion ranger said that the water from the spring had fallen on the mesa in the time of the Roman Empire and that it had taken 2,000 years for it to percolate through the sandstone.

Zion had the most tourists of any of the parks in Utah that we visited, probably because the weather was the mildest in November.  A trio of rock climbers was slowly ascending a sheer thousand-foot cliff while we were there.  The cliffs of Zion are second in popularity after Yosemite National Park for rock climbers to tackle.  Rock climbers are sometimes restricted from certain cliffs In Zion because of nesting peregrine falcons.

It rarely freezes in the city of St. George, Utah, which is less than an hour drive away from Zion.  We stayed in the historic district in a house built of adobe bricks in the 1870s by Mormon pioneers.  Across the street was Brigham Young’s house and grounds, which is open to free tours.  During the summer, a variety of crops are harvested in small amounts on the small Brigham Young estate, such as pomegranates, almonds and cotton.  A huge mulberry tree shades the house, planted by the Mormons more than a hundred years ago.  The mulberry leaves were used to feed silkworm caterpillars.  Cotton was an early crop in the area, which was nicknamed “Dixie.”  Rosemary hedges are common in the historic district, which must be irrigated to maintain its oasis-like quality.

We saw this tarantula by the side of the trail. It's probably a male looking for romance. Females stay in their burrows and are nocturnal.

We saw more wildlife in Zion than anywhere else.  We saw a pair of California Condors, an endangered species (more on them in “Awesome Utah”).  The Zion ranger pointed out a pair of rare golden eagles, too, but I wasn’t eagle-eyed enough to see them. There were Mule deer near a couple of the shuttle stops and along some of the trails.  They didn’t seem to mind human visitors, as long as we didn’t get too close.  A tarantula scuttled along one of the trails.  Tarantulas are rarely seen in Zion, because they are reclusive and nocturnal.  But sometimes, the males can be seen in late summer and early fall when they are out cruising for females. We saw the pictured tarantula along a trail during the day on November 6. Click here to see my  Collage Card of Nine of My Photographs of Utah.

Half of the visitors to Zion National Park are hauling "high octane" cameras and equipment, but this photographer is even more serious than most.

Here are some websites:

Mormon president Brigham Young spent winters in this house in St. George, Utah, in his later years. The guide told us that Young only brought one wife with him. Young was thought to have had as many as 55 wives.

We stayed at the Seven Wives Inn in St. George, Utah. It was built of adobe bricks in 1873. Polygamists hid in the attic here after polygamy was outlawed in the state in 1882. Benjamin F. Johnson, who stayed in the house, did have seven wives. In 1983, one of Johnson's descendents restored the house and established it as the first registered bed and breakfast in Utah. The house is in the historic district of St. George, which includes Brigham Young's winter home. 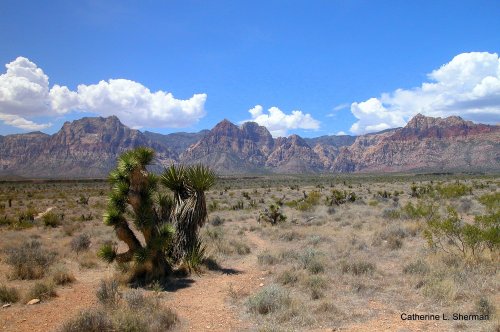 Nature means something different in Las Vegas. Here is glass artist Dale Chihuly's version of flowers, "Fiori di Como" on the ceiling of the lobby of the Bellagio Hotel.

This is a Las Vegas version of a fountain -- over the top. Five small airplanes write in the sky at the beginning of an afternoon water show in the lagoon in front of the Bellagio Hotel.

These rock climbers are linked together in Zion National Park in Utah.

9 responses to “More Awesome Utah (and a little Las Vegas)”