Children are enthralled as they watch workers make fudge in one of Murdick’s Fudge Shops on Mackinac Island, Michigan.

“The perfect candle scent for Mackinac Island would be a layer of fudge-scented wax, then a layer of lilac, then at the bottom a layer of horse manure,” joked Joe, one of our carriage drivers on our recent (and first) trip to Mackinac Island, a beautiful island in Lake Huron just between Michigan’s Upper and Lower penisulas.

Unfortunately, we just missed lilac season, but we did see plenty of fudge shops and horses, when my husband and I visited in late June.   There are more than a hundred varieties of the Common Lilac on Mackinac Island, which celebrates lilacs with a 10-day festival every mid-June, which concludes with a horse-drawn lilac parade.  I’d love to return for that event.

Even though no cars, trucks or other motorized vehicles are allowed on the island, there’s a lot of traffic with horse-drawn carriages, people on horseback as well as hundreds of bicyclists and thousands of walkers.  (The island does allow one police car, one ambulance and some electric golf carts on the golf course.)

Six fudge companies operate fudge shops on Mackinac Island, Michigan. Since each company seems to have at least two shops and some operate even more, that’s a lot of fudge on this small island. There are competing fudge shops next door to each other and some companies have opened fudge shops on opposite sides of the street — sort of like Starbucks Coffee. But, honestly, can you ever have enough fudge? There are as many as 15,000 tourists a day in peak season, so there is an enormous market for fudge. I bought fudge at Murdick’s Fudge. The Murdick Family opened its fudge shop in 1887, when sailmakers Henry and Rome Murdick came to Mackinac Island to make giant awnings for The Grand Hotel (the hotel was constructed in only 93 days!)

I bought the fudge for a gift, but I’m hoping the recipients will offer me a taste. (Yes, I managed to come home with uneaten fudge.) I’ve been known to preach (or even screech) about the dangers of sugar, but calorie counts don’t apply to any food eaten or bought on vacation, so I’ve been told. Even sugar is exempted. (Ok, even I don’t believe that.) But an occasional very small indulgence is good for the food soul. I’ll take a couple of extra laps around the neighborhood.

Mackinac Island, which is 3.8 square miles, has 80 miles of trails, if you want to walk off your fudge there. The entire island is a National Historic Landmark and 80 percent of it is Mackinac Island State Park. Initially, it was the second U.S. National Park, but the Feds later turned it over to the state of Michigan. 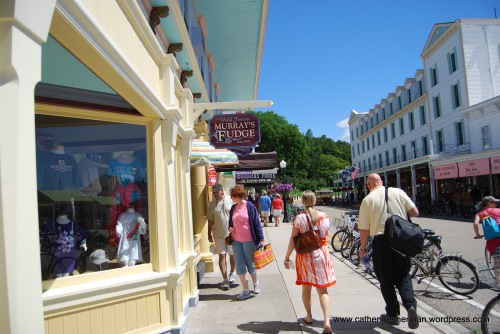 You can count at least three fudge shops in this photograph of a street on Mackinac Island, Michigan. You’d need four hands to count all of the fudge shops on the small island. The fudge shops are clustered conveniently close to where the tourists get off of the ferry. There are as many as 15,000 tourists a day in peak season. The fudge demand is enormous!