The Rainmaker in San Diego

“Everybody complains about the weather, but nobody does anything about it.”  Mark Twain made famous this quote by his writer friend Charles Dudley Warner.

According to an account in Wikipedia, the citizens of San Diego so appreciated Warner’s flattering description of their city in his book, Our Italy, that they named three consecutive streets in the Point Loma neighborhood after him: Charles Street, Dudley Street, and Warner Street.

Interestingly, San Diego leaders later proved Dudley’s quote wrong by actually hiring someone to change their weather.  In 1915, the San Diego area was suffering a drought.  They asked Charles Mallory Hatfield to produce rain to fill the Morena Dam Reservoir. Hatfield, who was from the San Diego area, had already achieved some acclaim for bringing rain to other areas, including Los Angeles. Hatfield was a “pluviculturist,” a fancy term for rainmaker.  By 1902, he had created a secret mixture of 23 chemicals in large galvanized evaporating tanks that, he claimed, attracted rain. (He took this recipe to the grave.) Hatfield called himself a “moisture accelerator.”

A Kansas native, but raised in California, Hatfield traveled western North America promising to bring rain to areas suffering a drought.  One of his biggest “successes” was San Diego, although he didn’t get paid because he “created” too much rain and was lucky he didn’t have to pay for damages.  Hatfield was hired by the city to fill the reservoir, which was only a third full.  Not long after he set up his apparatus filled with his secret chemical connection, it began to rain, and eventually the reservoir was filled  to overflowing and other areas flooded.  At least 20 people were drowned.

It’s likely the rain wasn’t the result of Hatfield’s efforts, but it was certainly a coincidence that more rain fell than usual.  According to the National Oceanic and Atmospheric Administration (NOAA), rain is most likely in November through March, with January, on average, measuring 2.28 inches.  NOAA didn’t mention January 1916 as being particularly rainy, though. When I visited my daughter in Huntington Beach, California, in January 2010, we had several days of perfect weather during which we watched a surfing competition and then a couple of days of really hard rain and high winds, something I’m no stranger to in Kansas, but golly, I came to California for the sun!  There was even a small tornado on the beach, which flipped over a car. (Click the link to my “Outgunned” post at the bottom of this post to see surfing competition photos.) 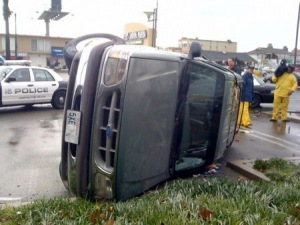 This car flipped over in a Long Beach, California, tornado in January 2010.

From the text associated with the YouTube video above about Charles Mallory Hatfield: “In 1915 the San Diego city council, pressured by the San Diego Wide Awake Improvement Club, approached Hatfield to produce rain to fill the Morena Dam reservoir. Hatfield offered to produce rain for free, then charge $1,000 per inch ($393.7 per centimetre) for between forty to fifty inches (1.02 to 1.27 m) and free again over fifty inches (1.27 m). The council voted four to one for a $10,000 fee, payable when the reservoir was filled. Hatfield, with his brother, built a 20-foot (6 m) tower beside Lake Morena and was ready early in the New Year.

Despite Hatfield’s flood, San Diego is said to have one of the most ideal climates in the world.  When I learned that my paternal grandparents lived in the San Diego area in the 1920s, I took an interest in the area’s history.  My grandfather Jack Sherman was a civil engineer surveying projects there, including orchards. My grandparents left California when my father and his two sisters were still young, returning to the Sturgis, South Dakota, where my grandmother’s parents owned a hotel. My grandmother missed home and her mother was sick, but when I first heard about that, I thought, leave sunny southern California, hmmm?  They had good reasons to leave. In addition to my maternal great-grandmother’s poor health, my grandparents’ Escondido house had burned down after a worker knocked over a lantern, but the Black Hills of South Dakota are cold! Of course, had they stayed, my parents wouldn’t have met, and I wouldn’t be telling this story.
My blog post on the Surfing Competition called “Outgunned.” My lens envy.
Wikipedia History of Charles Mallory Hatfield.
San Diego History Journal Biography of Charles Mallory Hatfield.
Charles Hatfield is buried in Forest Lawn Memorial Park, Glendale, California.
Southern California Tornado in January 2010.