John Davidson, head docent at the New London Museum, talks about some of the victims of the 1937 gas explosion at the school, including his sister, Ardyth. John was born three years after the explosion.

Twice a year, my mother and I visit my sister and her family in Texas, and we tour different areas of East Texas.  Last fall, I was fascinated to learn about the New London, Texas, school explosion of 1937, which killed more than 295 students and teachers. We visited the London Museum and cafe, which is across the street from the school complex that replaced the school destroyed in the explosion. It was so sad, especially to hear the story from John Davidson, a brother of one of the students killed in the blast. I can’t even imagine the pain that the community felt to lose almost a whole generation in one day.

On March 18, 1937, a natural gas leak caused an explosion, destroying the London School of New London, Texas, a community in Rusk County previously known as “London.” As of 2019, the event is the third deadliest disaster in the history of Texas, after the 1900 Galveston hurricane and the 1947 Texas City disaster. (From Wikipedia)

Northeastern Texas was a sleepy rural area until oil was discovered in 1930 in what turned out to be the second largest oil field in the United States outside of Alaska. The area suddenly boomed, attracting thousands of new workers and their families.  The area became very wealthy from oil, and a large new school complex was built to educate the children.

A model of the New London, Texas, school before the explosion.

By 1937, despite the Depression, the London Consolidated School District was very rich due to the “black gold” and provided well for its students, including sports uniforms, band instruments and buses.  Even so, despite this wealth, the school district decided to use a cheaper method to heat the school.

“Early in 1937, the school board canceled their natural gas contract and had plumbers install a tap into Parade Gasoline Company’s residue gas line to save money. This practice—while not explicitly authorized by local oil companies—was widespread in the area,” according to Wikipedia. “The natural gas extracted with the oil was considered a waste product and was flared off. As there was no value to the natural gas, the oil companies turned a blind eye. This “raw” or “wet” gas varied in quality from day to day, even from hour to hour.”

Natural gas is odorless and in 1937, natural gas was not treated with the “rotten egg” bad smell that is now added to make gas leaks noticeable. Gas built up throughout the school, and it’s thought that an electric sander ignited the gas, causing the massive explosion. The New London explosion prompted regulations to require a malodorant to be added to natural gas.  Carolyn Jones, a student survivor, led the crusade. 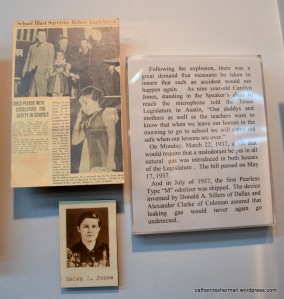 The gas explosion prompted the introduction of a malodorant in all natural gas. Natural gas doesn’t have a smell, which is why it can accumulate in dangerous amounts without warning.

Walter Cronkite, on his first major assignment, was one of the first to reach the scene of the explosion. He said of the experience: “I did nothing in my studies nor in my life to prepare me for a story of the magnitude of that New London tragedy, nor has any story since that awful day equaled it.”

Thousands from throughout the world expressed their condolences, including Adolf Hitler, who was the German Chancellor at the time. Hitler send a telegram, a copy of which is on display at the London Museum. Ironically, oil from the East Texas oil fields was essential in fueling the U.S. military’s fight against the Nazis.

Survivors and their families meet every year now after years of not talking about the event.  In October 2018, I met John Davidson, head docent at the New London Museum, whose sister Ardyth was killed in the explosion.  Davidson said his parents said little about how his sister died. John Davidson is quoted in some of the articles linked below. The New London Museum is a fascinating look at the town, the history as well as the explosion. It’s officially called the London Museum because that was the name of the town when the explosion occurred. The town rebuilt the school complex, perhaps like a phoenix rising from the fire. Be sure to check out the slide show of photographs, which includes additional photographs.

The New London, Texas, school complex and the memorial to those who died in the 1937 explosion.

About the New London School Explosion.

A Look Back at the New London, Texas, Gas Explosion.

About the East Texas Oil Field.

The New London, Texas, school complex and the memorial to those who died in the 1937 explosion. 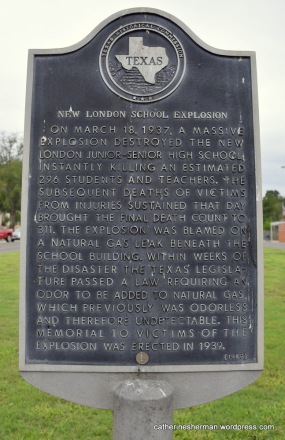 A sample of newspaper reports about the 1937 New London, Texas, explosion.

A model of the New London, Texas, school before the explosion. 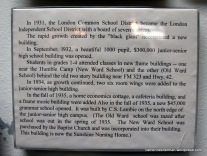 The gas explosion prompted the introduction of a malodorant in all natural gas. Natural gas doesn’t have a smell, which is why it can accumulate in dangerous amounts without warning.

John Davidson, head docent at the museum, talks about some of the victims of the explosion, including his sister, Ardyth. John was born three years after the explosion.

11 responses to “Remembering the New London, Texas, Gas Explosion of 1937”