As a writer and photographer, I’m often territorial about my words and images, so I can understand any creative person getting huffy or even litigious when their intellectual property is used without permission. If I want some pithy quotes, I use the words of a long-dead people, always crediting them, of course.

I designed a greeting card using a photograph I took of old books my mother has collected. I added some quotes from five long-dead authors and philosophers about books and then posted the card on a Print on Demand (POD) site where I have many products. The card is to be a small gift for my fellow book club members (Shhh, don’t tell them.)

There was no clue which element might have offended, so I pressed the POD site to find out. Was it one of the publishers listed on the book spines in the photograph? I couldn’t imagine that it would be any of the people I quoted. They’d all been dead at least seventy-five years, when copyrights expire. I realize that copyright issues are much more complicated than that (after all, lawyers are involved) and some copyrights can be renewed. I’ve recently learned that even many versions of the Bible are copyrighted. The King James version, however, is in the public domain. 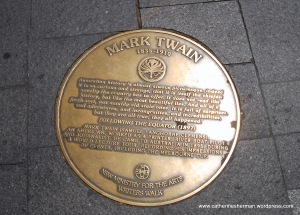 A plaque featuring Mark Twain's words about Australia is on Writers Walk on Circular Quay of Sydney Harbor in Sydney, Australia. Somehow I must have known I'd meet up with Mark Twain again when I took this photograph.

This was the advice I’d been given about Fair Use. “Public domain works are works whose copyrights were issued before 1923. Many authors choose to use quotes only from people who have been dead more than seventy-five years because their quotes are now considered “Fair Use” under the public domain. Copyrights are good for the duration of the author’s life and for seventy-five years beyond their death. It is generally safe to use quotes from authors who died 1936 or before.”

The POD site fingered the complainer: Mark Twain, or, more accurately, the representatives of Mark Twain. “We have been contacted by the licensing company (I won’t name them) who represent Mark Twain, and at their request, have removed the product from the …  Marketplace.”

Since I make no money from this blog, I hope Twain’s representatives don’t hunt me down here. I’m not even putting Mark Twain or his real name Samuel Clemons in the tags.

Mark Twain was very concerned about protecting his work from pirates, even though he also fussed over nitpicking copyright laws. He wanted the profits from his works — and he was sure there would be plenty of them — to continue to go to his daughters after his death. In Twain’s day, copyright protection expired after 42 years.

Twain is one of the most widely known authors in the world and is still kicking up a fuss today. A publisher recently republished  a politically correct version of “The Adventures of Huckleberry Finn” by substituting the word slave for the N word, which provoked a lot of discussion — and more sales.

In November 2010, the first of three volumes of Twain’s autobiography were published complete and unexpurgated for the first time by the Mark Twain Project a hundred years after Twain’s death. Twain had said that he wanted to suppress the publication of some of his more biting comments for a hundred years, but Twain shrewdly also knew that this new version would start the clock ticking on new copyright protection.

Here are two discussions about Twain and copyright:
Mark Twain’s plans to compete with copyright “pirates” (in 1906)

The Mark Twain Project’s Discussion of Copyright and Permissions.

About the Politically Correct Version of “The Adventures of Huckleberry Finn.”

Here’s a link to the revised greeting card minus the Mark Twain quote.   I did use a quote from Abraham Lincoln and another from Kenkō Yoshida (or Yoshida Kenkō), a Japanese Buddhist monk, who died around 1350.  I think I’m safe there, but you never know.

“A day is coming, when, in the eye of the law, literary property will be as sacred as whisky, or any other of the necessaries of life.” ~ Mark Twain ~