Have a Nice Trip

With a newly broken toe, I  walked a long trail and climbed 374 steps to the summit of Bartolome Island, which is famous for Pinnacle Rock, a towering obelisk that rises from the shore and is the best known landmark in the Galapagos Islands of Ecuador. I’d broken my toe when I slipped on a wet boat deck, exhausted from snorkeling in deep water, but I wasn’t going to miss this view even though a storm was rolling in. It started to rainhard as our group made its way down.  Amazingly my cameras weren’t damaged. My son took pity on me and carried my heavier camera, and we both protected them as best we could under our shirts. We’d left the camera bags in the boat.

Photographs are powerful souvenirs from trips. When we look at a photo that we’ve taken, we remember so much more than what the photograph seems to reveal.  We can relieve the whole experience.

We remember the people we traveled with, even meals we ate that day, the weather, and in my case, the mishaps that occurred while I was taking the photos.  Sometimes, it’s easier to remember the injuries than the many more times I escaped unscathed.   Anyway, I’m not complaining, because every bug bite, black eye, bruise, scraped knee and broken bone was worth it.  I’m lucky I didn’t fall from a cliff or attacked by a wild animal, as has happened to some photographers when they were engrossed in taking a photograph. I’ve had some close calls, such as encountering a tiger snake in Tasmania, Australia, while my friends and I were on a walk. I’m grateful for the opportunity to see and photograph so many wonderful places, animals and people.

As we were driving along a highway in Kauai, Hawaii, my husband pointed out the surfers on this beach, so we stopped, where I took a lot of photographs, including this fabulous sunset over Niihau Island. Afterward, as I was climbing up the rocks to the parking lot, holding a camera in each hand with the straps wrapped around my wrists, I lost my balance and fell on my face. I got a black eye. But I saved my cameras! And look at this photo!

I was so intent on photographing roses at the Tyler Municipal Rose Garden during the Texas Rose Festival that I didn’t notice tiny ants crawling over my bare toes in sandals. The ants looked harmless, but they were fire ants. I brushed them off, but it was too late. Wow, their tiny stings hurt for days! Now I know why Texans favor cowboy boots. Cowboy boots are not just for riding horses.

Look how smart these tourists are wearing their rubber boots as they listen to their guide talk about giant tortoises in the highlands of Santa Cruz Island in the Galapagos Islands of Ecuador. You can see a giant tortoise in the background on the right. We had just arrived on the Galapagos Islands. It was hot, and I decided against wearing any boots. I thought I’d just wash my flip-flop-clad feet if I stepped into mud. But mud wasn’t the only hazard. As I stood on a trail, I saw tiny ants crawling over my toes. Yes, fire ants again! They’ve invaded the Galapagos Islands! They stung me, and I had to deal with that pain plus sun-burned feet. (And later sun-burned shoulders, too.)

This is the most iconic view of Machu Picchu in Peru. Even though I took a bus up a steep hill to the entrance, there were a lot of steps to reach this point. Normally, I could have easily walked it, but I was still weak from acute altitude sickness in Cusco, which is at an elevation of 11,152 feet. It was a relief to come down to 7,970 feet at Machu Picchu. I happy to make the journey to this magnificent place, even though I felt so weak. Somehow I managed to take a lot of photos!

I have a scar on my knee from scraping my knee when I stepped into a hole at Squaw Creek Wildlife Refuge in Mound City, Missouri. I was hurrying to a viewing stand, not paying attention, and found myself on the ground. “Are you ok,” my friend asked as she helped me up. “More importantly, are your cameras ok?” she joked. My knee was scuffed up, but my cameras were fine! We were there to see the more than a million snow geese that visit the refuge as they migrate, shown in my photograph here. Seeing and hearing the rush of those birds as they lifted en masse into the air was a magnificent experience, worth the pain, although next time I’ll be more careful when I walk!

I got scratched by some dried weeds when I took this photograph of a bison cow at the Maxwell Wildlife Refuge in Kansas. (There was a tall fence between us, so no danger from the bison.) I thought the scratches were all that happened to me until a week later I felt what I thought was a scab on the back of my shoulder. I scratched at it. The scab started walking. It was a tick! I’m sure it crawled on me in that tall grass. For months after that, every time I felt tired or had a headache, I thought I had some kind of tick fever. I even got tested for it, rare for me. Results were negative. Phew!

Sometimes, we venture into dangerous areas, where lions and leopards roam freely, and miraculously leave unscathed. We watched as this Cape Buffalo Bull enjoyed a mud bath in Mala Mala Game Reserve in South Africa. Guess he didn’t like us spying on us, because after his bath he started our way. His buddy, who had taken the first bath, was watching us from the bushes. Fortunately, it was a stand-off .  Our guide backed up the jeep, and we were out of there!  Cape Buffalo are dangerous. They can gore you. 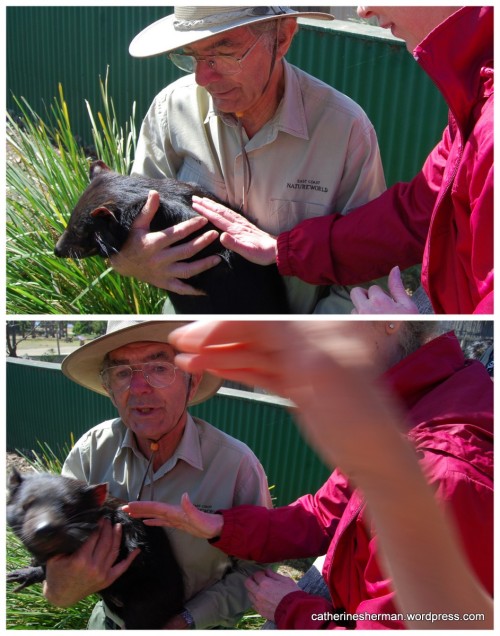 My friend Anita recorded this encounter in Tasmania, Australia. I had a crazy notion that I wanted to pet a Tasmanian Devil. The keeper at NatureWorld held this young devil so I could have my wish. “Nice devil, devil,” I said as I stroked him. A young man also wanted to join in. The once calm devil jerked his head around, and growled. You can see the man’s hand pulling back in the bottom photo. I didn’t lose any fingers! 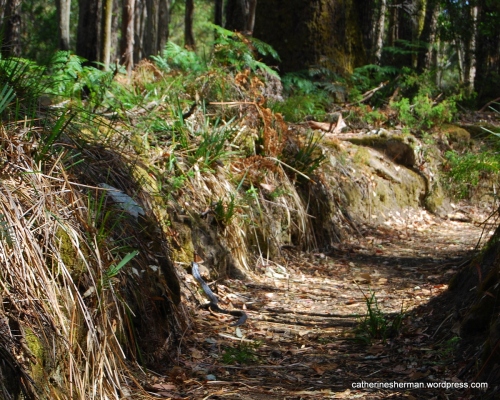 Four of us were on a hike in Tasmania, when Anita saw this very poisonous tiger snake heading our way. For some crazy reason, my husband threw a stick near it, thinking he could scare it away, but that just provoked the snake, which reared up. You never saw four people run so fast in the other direction. We jumped in the car and hurried away. 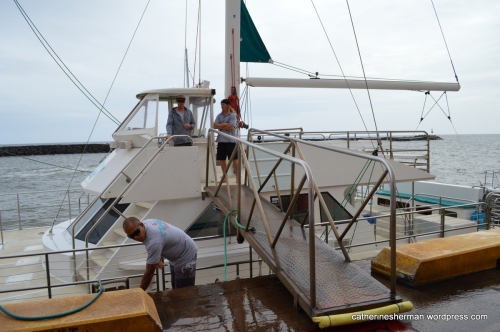 Because of the weather, the captain of our boat warned us that the trip along the Na Pali Coast of Kauai could be rough and said we could reschedule, but we only had two days left on the island. I’d never been seasick before. How bad could it be? Even though my husband and I took the recommended seasick pills, we both got sick. How sick? I used three buckets! TMI, I know. The swells were seventeen-feet high. We couldn’t even think of eating the sunset dinner buffet. The sun refused to come out from behind the clouds, and we had to put away our cameras, so we didn’t get any close photos of the humpback whales we saw.  But it definitely was a memorable trip, even without beautiful photos.

Here’s one of the videos I shot before the seas got really rough. You can see how gloomy it was.  You can also see a humpback whale breaching in the distance. 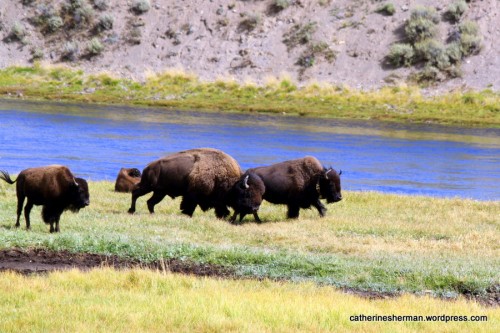 Bison race along the Yellowstone River in the Hayden valley of Yellowstone National Park in Wyoming, enjoying the sunny day.

In the last week of August 2013, these bison were racing along the Yellowstone River in the Hayden Valley of Yellowstone National Park, enjoying the warm weather.  The third bison, the one in back, quickly dropped out of the race.  I entered another photo of this bison race in the Official Federal Recreation Lands 2013 Photo Contest.  Click on these links to see my entries (and vote, if you would be so kind!) and also learn about the contest.  Photographs taken on America’s federal lands, national parks and historical sites from Jan. 1, 2011, through Dec. 31, 2013, are eligible.  Did I mention there were prizes! If you enter the contest, be sure to put the link to your photos in the comment section.

“Two Bison on the Overlook” Entry.