The Old Red Bridge over the Blue River in Kansas City, Missouri, is near the first river crossing on the Santa Fe Trail, the first of many rivers to cross on the long trail to Santa Fe, New Mexico.

The last time I visited Santa Fe, New Mexico, I saw a sign at the end of Santa Fe Trail.  Not unusual, since it was Santa Fe, after all.  But I realized then that I’ve lived near the beginning of the Santa Fe Trail in the Kansas City area for decades, but I didn’t think much about it despite signs mentioning it everywhere. Sometimes you have to leave a place to really see it.

I recently visited the Old Red Bridge in Kansas City, Missouri, for the first time. I’ve driven by it many times and didn’t see it tucked below the newest bridge on Red Bridge Road. I’ve been to Red Bridge Shopping Center scores of times, too. Did I ever wonder why the name? Not really.

The Old Red Bridge in Kansas City, Missouri, is now a spot for lovers to pledge their eternal love, but the original structure once served a more prosaic, but essential service — providing a bridge over the Blue River for travelers and freighters heading west on one of three historic trails, including the Santa Fe Trail.

More than 3,500 love locks are attached to the Old Red Bridge rails. Lovers are instructed not to toss the keys into the river, where they could hurt wildlife that might swallow them. Instead they are to drop the keys into one of two boxes on the bridge. The keys are to be collected and forged into a butterfly sculpture. When I visited, though, the boxes had been broken open by some hard-hearted vandal.

Old Red Bridge is the third of four bridges to span the Blue River near the first river crossing of the trails that led west. Old Red Bridge is in the 3-Trails Corridor park, Red Bridge Segment, dedicated to three National Historic Trails: Santa Fe, Oregon and California.

Beginning with William Becknell in 1821, the Santa Fe Trail was a 19th-century transportation route through central North America that connected Independence, Missouri with Santa Fe. Thousands of people traveled the Santa Fe Trail to trade in places like Bent’s Old Fort, the Kozlowski’s Stage Station, and in the plaza in Santa Fe.

Emigrants heading west from Independence, Missouri, encountered their first river crossing at this site. On May 8, 1846, Virgil Pringle, “went 12 miles to the Blue and encamped, it being too high to cross. Another wagon capsized at the encampment. . . . No injury to persons or property.” The next day his party, “crossed the Blue soon in the morning.”

In 1859, the first red bridge was built by Colonel George N. Todd, a 50-year old Scottish stonemason. The 100-foot span was a covered wooden bridge on stone piers, located just downstream from today’s two bridges at the actual trail crossing, which is the first river crossing on the trail. The first bridge was painted red, creating the “Red Bridge” neighborhood name.

After the original bridge was torn down in 1892, a steel bridge, called a “tin” bridge, also painted red, replaced it. The 1859 bridge was dismantled; local farmers recycled the lumber into barns.

A third Red Bridge replaced the 1892 “tin” bridge and was dedicated by the 33rd U.S. president Harry S. Truman (when he was a judge) in 1932 during the Great Depression. This bridge, now called Old Red Bridge, is made of concrete, red painted steel and red granite. It was built by Jackson County; Richard Wakefield was the architect.

When the newest Red Bridge was opened, the Old Red Bridge became the Love Locks Bridge. It has been festooned with more than 3,500 locks since opening in February 2013. It stands next to the new bridge and is now a foot bridge in the park. 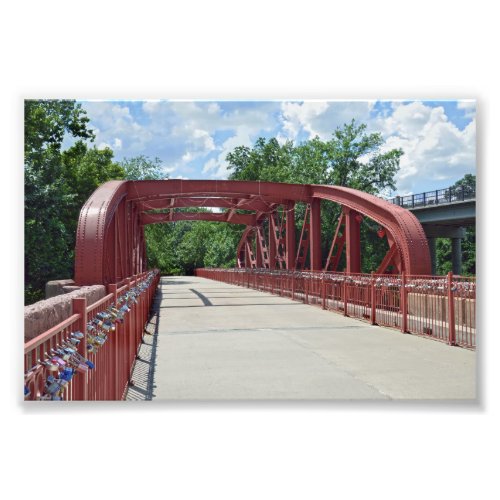 More information about the beginning of the Santa Fe Trail is in the links below:

About the Santa Fe Trail – Highway to the Southwest

A Great Blue Heron watches for fish at the base of a waterfall at the Watts Mill Historic Site in Kansas City, Missouri.

I’ve driven by the Watts Mill Historic Site a thousand times. Although it’s somewhat hidden,  it’s across from where I bought groceries for many years and down the street from my stylist’s former salon. I’d picked up my husband many times at the nearby car dealer when he was getting his car serviced. Favorite restaurants were nearby. How could I have missed this idyllic spot? I even knew about it. I just didn’t realize how peaceful and lovely it would be, nestled as it is among shopping centers and car dealerships.

My friend Lynn and I were on a photography expedition, and she pulled into the parking lot to check out the falls for a photography opportunity. We’ve had a lot of rain, so the water was really flowing.

The park, at 103rd and State Line, was a campsite for people heading out on the Oregon, California and Santa Fe Trails. The area that is now a park was the site of gristmill, built in 1832, known as Watts Mill (first known as Fitzhugh’s Mill), and then Watts Mill. The park is situated on the banks of Indian Creek where the creek flows across flat rocks and tumbles over a waterfall. This location was dedicated June 10, 1974, as a historic site.

Also enjoying the creek were plenty of Canada geese and mallard ducks, as well as songbirds.

The Great Blue Heron (Ardea herodias) is a large wading bird in the heron family Ardeidae, common near the shores of open water and in wetlands over most of North America and Central America as well as the Caribbean and the Galapagos Islands.