Don’t Fence Me In! 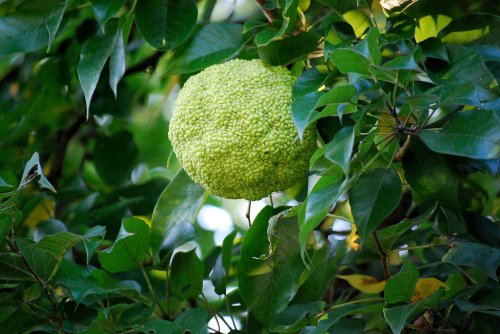 Hedge apples are the fruit of the Osage Orange tree, but unfortunately they aren't aren't edible. Too bad, because they seem to be everywhere in early fall in the Midwest.

Devon, England, has some of the most ancient and renowned hedgerows in the world. I haven’t been there in person, but Paula of Locks Park Farm in Devon (link below) took her readers on a virtual tour of the hedgerows on her farm.  You could almost hear the song thrush singing in the trees as we “walked” along the path.  It was a sunny day after weeks of rainy weather in the Devon countryside.  In her photographs, the rose hips, crab apples and elderberries are explosions of color among the green leaves.  Somewhere dormouse nests (Alice in Wonderland!) are hidden in the hedges.

I told her we have “old” hedges here, too — not a thousand or more years old, of course.  One hundred and fifty years old is an ancient hedgerow here in the Midwest.  Our hedgerows consist mostly of Osage Orange trees, Maclura pomifera, which were planted densely together to confine cattle in the days before barbed wire.  Because these trees are so durable, they still mark the pastures, even though fencing is now used.  Paula describes her county’s hedgerows as part of a patchwork field system and imagines ours as vast fields, which in the Midwest is often true.  There’s a Cole Porter song that begins “Oh, give me land, lots of land under starry skies above, don’t fence me in.”  Everyone from Bing Crosby to ABBA has sung it.  (Videos below.) 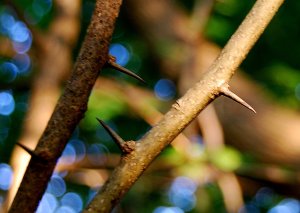 Osage Orange wood is very dense and prized for bows, tool handles and other uses.  It’s sometimes called ironwood, because it’s so hard to cut. Other plants, including varieties of dogwood shrubs and wildflowers such as goldenrod and sunflower, grow among the Osage Orange trees, providing homes for wildlife.  The trees were named for the Osage Indians of the area, for the color of the wood and for the fruit, called hedge apples, which are about the size of a large orange.  They aren’t toxic, but they’re not a good food source, either. 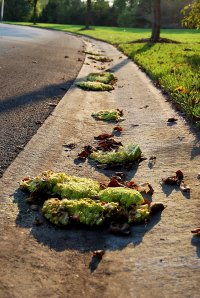 Extinct animals such as the giant ground sloth and the mammoth from 10, 000 years and longer ago may have eaten hedge apples, but now only squirrels seem to find any part of them nutritious.  They tear apart the apple to get at the seeds, leaving a mess.  A few other animals, such as horses and cattle, will eat the fruit, but it’s not very good for them.

In my neighborhood, Osage Orange trees grow in a wild area at the edge of the landscaped areas, and the hedge apples fall on the street and are smashed by passing cars.  To learn more click on all about the osage orange tree.

Sunflowers, goldenrod, dogwoods and other plants grow in the remnants of a hedgerow in my neighborhood.