Every Thanksgiving, the Country Club Plaza in Kansas City, Missouri, comes to life with Christmas lights that glow until mid-January. The Plaza was the first shopping center in the world designed to accommodate shoppers arriving by automobile. Established in 1922 by J. C. Nichols, the Plaza was designed architecturally after Seville, Spain. 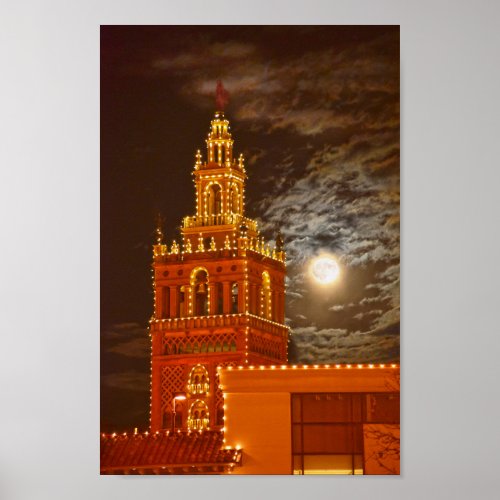 A friend and I wanted to photograph the full moon rising over the Plaza on the Saturday before Christmas.  We were hoping for a reflection in the water of Brush Creek, but the moon was hidden by clouds.  Then the moon appeared almost magically like a huge ornament in an opening in the clouds next to the Giralda Tower. This night is definitely one of the busiest times of the year on the Plaza, so many people were able to enjoy this spectacle.  The sidewalks, stores and restaurants were crowded with people.

The Giralda is a Kansas City landmark. It stands 138 feet (42 meters) tall at the corner of West 47th Street and J.C. Nichols Parkway. When urban developer J.C. Nichols visited Seville, Spain in the 1920s, he was so impressed with the 12th-century Moorish tower of Giralda that he built a half-scale replica in the Country Club Plaza. The tower was officially christened by then-Seville mayor Felix Morena de la Cova, along with an official delegate in 1967, the same year in which the both cities became sister cities.

The original Giralda tower was the minaret of the 12th century Muslim mosque; a Christian belfry was added in 1568. The name Giralda means “she who turns” – girar is to turn in Spanish, after the weather vane on top of the tower, a statue representing faith called El Giraldillo. 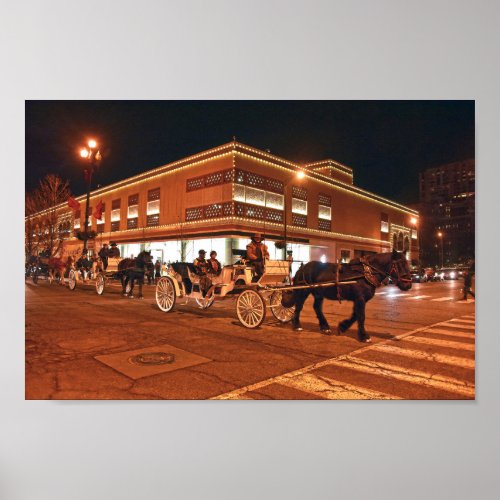 Horse carriage rides are a popular activity on the County Club Plaza, especially during the Christmas season, when the buildings are aglow with tens of thousands of lights. I do worry about the horses, though.

May Your Holidays Be Bright! 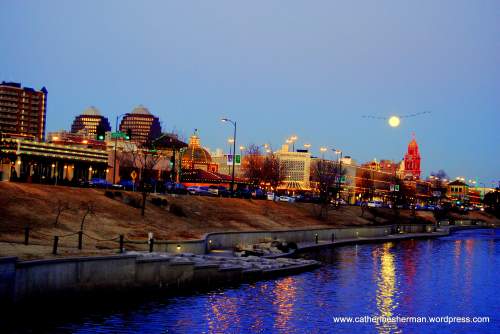 Geese fly in their famous v-formation against the backdrop of a full moon and the cheerful lights of the Country Club Plaza in Kansas City, Missouri.

In this season, partly dedicated to consumerism, I’m posting this photograph I took this past January of the Country Club Plaza Shopping Center, one of Kansas City’s notable areas.

The Country Club Plaza was the first shopping center in the world designed to accommodate shoppers arriving by automobile.  J.C. Nichols, a residential developer of nearby upscale homes, designed the shopping center after European styles, especially those of Seville, Spain.  More than thirty statues, murals, and tile mosaics adorn the Plaza, as well as major architectural reproductions, such as a half-sized Giralda Tower of Seville (the tallest building in the Plaza).

Even though the Country Club Plaza was designed for automobiles, once you arrive you really need to park your car in one of the garages and walk from store to store.  Pedestrians rule on the Plaza.  Thousands of people live in condominiums and apartments nearby, and the Plaza is always teeming with activity.  I drive by a lot, because my mother-in-law lives nearby, and it’s also on the way to the Nelson-Atkins Museum of Art.  I’m not a shopper, though, so I seldom join the throngs, except to go to some of the great restaurants.  A quaint restaurant on the Plaza with fantastic vegetarian food is Eden Alley, which is in the lower level of the Unity Temple. It also has a great people-watching patio outside.

The trend in Kansas City now and elsewhere is to look toward another European design, and that’s mixed use –Situating housing areas, restaurants and stores in the same area, so that you can easily walk to a store or restaurant from your home. 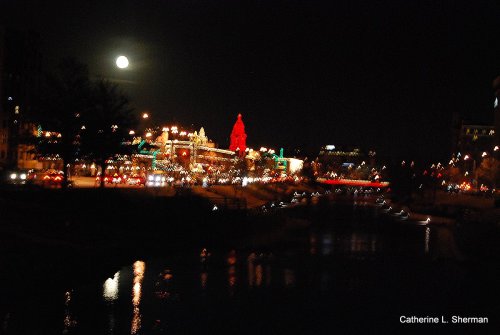 The full moon hung like a huge ornament over the Christmas lights of the Country Club Plaza shopping center in Kansas City on Saturday. When we rounded the curve of Ward Parkway in our car, the sight was breathtaking. At a red light on a bridge over Brush Creek, I jumped out and snapped a couple of shots. I knew they were blurry, but we'd stopped traffic so I couldn't get any more. A woman, who had walked onto the bridge, was also photographing the scene. "Isn't it crazy beautiful!" she exclaimed. I agreed. Next year, I'll set up a tripod and take a proper photograph. This year, you have to pretend it's a painting by Claude Monet.

The full moon adorned the glowing Bloch Building on Saturday. You can see the moon in the center between the trees. Actually, this photo was taken one day after the moon was full, but it's still an impressive sight (much more so in person, really!) On Friday night, the moon appeared 14 percent bigger in our sky, because it was at its closest point to Earth this year. It was also 30 percent brighter than some other full moons during the year, according to space.com. The moon makes a trip around Earth every 29.5 days, but the orbit isn't a perfect circle. On Friday night, the moon was 221,560 miles (356,567 km) away. The average distance is 238,855 miles (384,400 km). 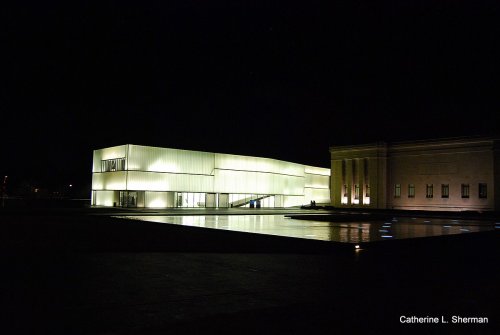 You can't see the moon here, but the Bloch Building creates its own glow. The Bloch, a new addition to the Nelson Atkins Museum of Art, houses contemporary art.