A giant sequoia towers above visitors to Tuolumne Grove in Yosemite National Park. Tuolumne is one of three named sequoia groves in Yosemite.

A year ago (September 2012) my husband and I visited Yosemite National Park, a magnificent place.  Here are some photos from the Tuolumne Grove of Giant Sequoias, which is near the Rim Fire, California’s fourth largest fire since 1932. It’s burning an area more than seven times larger than San Francisco (about 368 square miles), according to an NBC story. The California Department of Forestry and Fire Protection reported that the Rim Fire was 75% contained Tuesday, Sept. 3, 2013.

The Yosemite park staff posted this on its Facebook page: Giant sequoias are resistant to, and thrive on, frequent small fires that naturally burned every several years. In order to protect the giant sequoias from the extremely intense Rim Fire, crews performed some protective work in the Tuolumne Grove of Giant Sequoias just over a week ago (as you can see in this video). Since then, firing operations in the area have provided additional protection. So, while fire maps show the Tuolumne Grove within the fire perimeter, the giant sequoias are safe.

Click on any thumbnail to see a much larger size in a slide show, including Tuolumne Signs in a readable size. 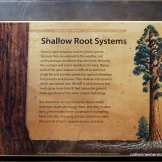 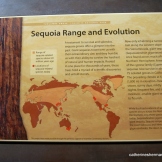 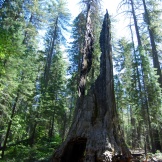 This giant sequoia in Tuolumne Grove in Yosemite National Park suffered the double indignity of being cut through, which weakened it, and then enduring a fire. 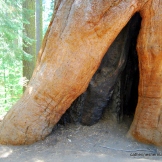 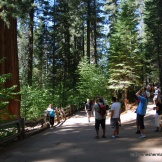 Everyone looks small when photographed next to a giant Sequoia. Here are tourists in Tuolumne Grove in Yosemite National Park.