Jackson Galaxy is signing the book bag I won in a drawing at his talk in Kansas City on May 8, 2013.  The first book I put inside was Galaxy’s Cat Daddy: What the World’s Most Incorrigible Cat Taught Me About Life, Love, and Coming Clean, which he also signed.

Is your cat mojo working? I got my mojo revved up last night when Jackson Galaxy came to town in a Rainy Day Books event.

Jackson Galaxy’s “cat mojo” approach to cat behavior helps people to understand why their cats act the way they do. Galaxy, a cat behaviorist, spoke to a large, very enthusiastic crowd at Unity Temple on the Kansas City Plaza on Wednesday, May 8, as his first stop on a book tour for his book “Cat Daddy: What the World’s Most Incorrigible Cat Taught Me About Life, Love, and Coming Clean.”

Galaxy, known as the Cat Daddy, is the star of Animal Planet’s popular television show “My Cat from Hell.” My cats have all been little sweethearts, but even purr-fect cats can use a little mojo.

Many of the attendees were volunteers and staff members at Kansas City area no-kill shelters, such as Wayside Waifs, where I volunteer. In fact, many of these dedicated animal lovers helped to organize the event, including a reception. While on his book tour, Galaxy, a life-long shelter worker, has a great appreciation for shelter workers. At a shelter where he worked, Galaxy developed his cat mojo methods to help misbehaving cats become adoptable. Galaxy is also devoted to reducing to zero the number of animals that are killed in shelters. While that might seem an impossible goal, the number of animals euthanized has dropped dramatically in recent years. Spread the gospel of the joys of being a cat or dog guardian! Spay and neuter, too.

At Wayside Waifs, I’ve marveled to see scared and unhappy cats become loving companions with the love and devotion of the staff and volunteers. (Who wouldn’t be mad after what some of these cats have experienced?)   If you understand the needs of cats — food, territory, the need to hunt and explore, some companionship and physical contact — you can guide a cat to better behavior and enjoy meow-velous companionship. Looking at this list of feline needs, I see cats and humans are not so different after all! 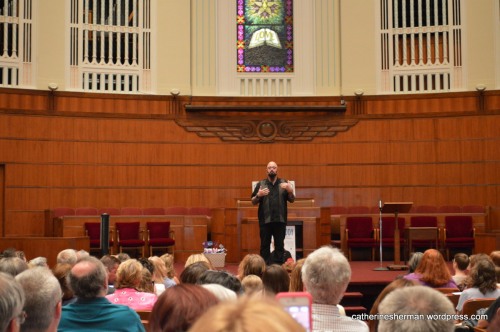 When a woman in the audience asked whether most cat lovers were women, scores of men stood up to announce that they were “cat men.” 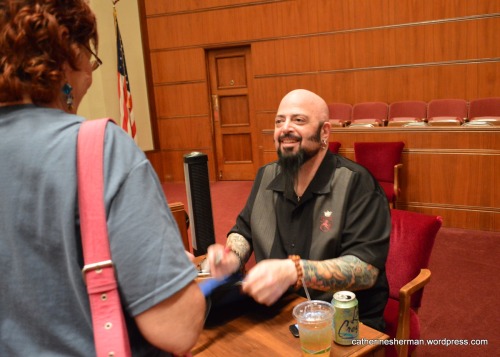 After his talk in kansas City, Jackson Galaxy signed copies of his book “Cat Daddy: What the World’s Most Incorrigible Cat Taught Me About Life, Love, and Coming Clean.”

Click on “My Cat From Hell” to see episodes.

Tony (he’s on the back of the motorcycle here), is one of the cats featured in “My Cat From Hell. ”  Tony, with his friend Bud, is a star of greeting cards, designed by Tony’s guardian, Betty Matsumoto-Schuch. Click on the card to see more.

The episode featuring Tony: My Cat From Hell — Tony’s Follow-up

To see Screen-Size versions of these photographs, click on the thumbnails:

As a writer and photographer, I’m often territorial about my words and images, so I can understand any creative person getting huffy or even litigious when their intellectual property is used without permission. If I want some pithy quotes, I use the words of a long-dead people, always crediting them, of course.

I designed a greeting card using a photograph I took of old books my mother has collected. I added some quotes from five long-dead authors and philosophers about books and then posted the card on a Print on Demand (POD) site where I have many products. The card is to be a small gift for my fellow book club members (Shhh, don’t tell them.)

There was no clue which element might have offended, so I pressed the POD site to find out. Was it one of the publishers listed on the book spines in the photograph? I couldn’t imagine that it would be any of the people I quoted. They’d all been dead at least seventy-five years, when copyrights expire. I realize that copyright issues are much more complicated than that (after all, lawyers are involved) and some copyrights can be renewed. I’ve recently learned that even many versions of the Bible are copyrighted. The King James version, however, is in the public domain.

A plaque featuring Mark Twain's words about Australia is on Writers Walk on Circular Quay of Sydney Harbor in Sydney, Australia. Somehow I must have known I'd meet up with Mark Twain again when I took this photograph.

This was the advice I’d been given about Fair Use. “Public domain works are works whose copyrights were issued before 1923. Many authors choose to use quotes only from people who have been dead more than seventy-five years because their quotes are now considered “Fair Use” under the public domain. Copyrights are good for the duration of the author’s life and for seventy-five years beyond their death. It is generally safe to use quotes from authors who died 1936 or before.”

The POD site fingered the complainer: Mark Twain, or, more accurately, the representatives of Mark Twain. “We have been contacted by the licensing company (I won’t name them) who represent Mark Twain, and at their request, have removed the product from the …  Marketplace.”

Since I make no money from this blog, I hope Twain’s representatives don’t hunt me down here. I’m not even putting Mark Twain or his real name Samuel Clemons in the tags.

Mark Twain was very concerned about protecting his work from pirates, even though he also fussed over nitpicking copyright laws. He wanted the profits from his works — and he was sure there would be plenty of them — to continue to go to his daughters after his death. In Twain’s day, copyright protection expired after 42 years.

Twain is one of the most widely known authors in the world and is still kicking up a fuss today. A publisher recently republished  a politically correct version of “The Adventures of Huckleberry Finn” by substituting the word slave for the N word, which provoked a lot of discussion — and more sales.

In November 2010, the first of three volumes of Twain’s autobiography were published complete and unexpurgated for the first time by the Mark Twain Project a hundred years after Twain’s death. Twain had said that he wanted to suppress the publication of some of his more biting comments for a hundred years, but Twain shrewdly also knew that this new version would start the clock ticking on new copyright protection.

Here are two discussions about Twain and copyright:
Mark Twain’s plans to compete with copyright “pirates” (in 1906)

The Mark Twain Project’s Discussion of Copyright and Permissions.

About the Politically Correct Version of “The Adventures of Huckleberry Finn.”

Here’s a link to the revised greeting card minus the Mark Twain quote.   I did use a quote from Abraham Lincoln and another from Kenkō Yoshida (or Yoshida Kenkō), a Japanese Buddhist monk, who died around 1350.  I think I’m safe there, but you never know.

“A day is coming, when, in the eye of the law, literary property will be as sacred as whisky, or any other of the necessaries of life.” ~ Mark Twain ~

How to Sell Greeting Cards

Fellow card designer Tom Rent alerted me to this hilarious video from the masters at Hallmark about how to sell greeting cards.  Tom and I are freelance card designers who hope to lure away a few card buyers from Hallmark, which is a big dog in my hometown. Sadly, I’ll never be more than a runt of the litter, but a pup can dream, can’t she?  (Freelance is an interesting word from the days of knights in armor. More about that later.) Here’s one of Tom’s cards.

I’m not funny like Tom, but I love photography (and surfing!) so I tend toward the scenic, like this:

A Greeting Card For Every (Ridiculous) Occasion!

As a fledgling greeting card designer, I thought this was an hilarious video. The end was particularly silly!