The Hottest Little Festival in Texas 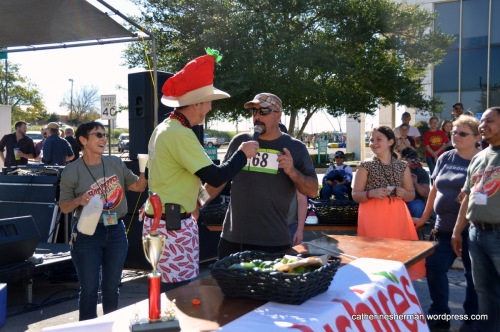 Amazingly, the winner James can still speak even after eating a ghost pepper, which is rated at over one million Scoville units in heat.

There are a lot of festivals in east Texas, celebrating everything from roses, peanuts, yams, trains, pecans, mushrooms, pipe organs, chili making, stew making, duclimers, dogwoods and even feral hogs.

The Hot Pepper Eating Contest trophy with some of the hot peppers in the contest.

Palestine, Texas, boasts that it hosts the Hottest Little Festival in Texas every October. My family and I arrived in historic downtown Palestine in time for the hot pepper eating contest on Saturday, October 22, 2016.  Six brave people entered the contest. (Another two were turned away because they weren’t eighteen.)

The master of ceremonies of the Hot Pepper Eating Contest, which was sponsored by Brookshire Grocery Company.

The master of ceremony told each contestant that they had to chew the pepper for a while and not swallow it until he told them to. I would have stopped after the banana pepper. James, the winner, received $150 and a trophy in the shape of a red hot pepper. The two runners up received a cake.  Each contestant got a glass of milk to drink to neutralize the heat.

According to Wikipedia, Palestine is a relatively small town located in the Piney Woods area of Texas,  equidistant from the major airport cities of Dallas, Houston and Shreveport.  It celebrates its natural beauty characterized by a magnificent dogwood floral blooming season with an annual Dogwood Trails festival in April. It’s a small town of about 20,000 people, but it’s big on history, with 1,800 historical sites on the National Register of Historic Places.  It’s the western terminus of the Texas State Railroad, a steam and diesel railroad museum operating between Palestine and Rusk.

All six of the entrants were able to eat the banana peppers.

The winner James, holding his trophy, drinks milk to neutralize the burning sensation. James has won the contest several times. 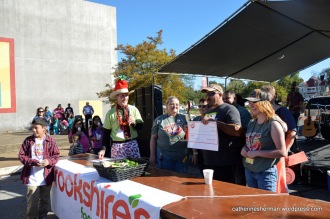 Amazingly, the winner James can still speak even after eating a ghost pepper.

Contest watchers keep a safe distance from the hot peppers.

All six of the entrants were able to eat the banana peppers.

Contest participants prepare to eat their jalapenos. James, the eventual winner int he foreground, has already started eating his. 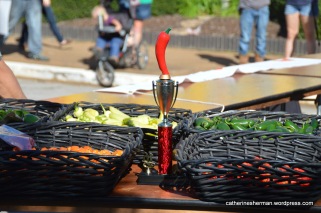 The Hot Pepper Eating Contest trophy with some of the hot peppers in the contest.

The master of ceremonies of the Hot Pepper Eating Contest, which was sponsored by Brookshire Grocery Company.

There were plenty of food options, such as ice cream cones.

After playing on the inflatable playground, you could order corn dogs and lemonade.

Next to the festival was the Sacred Heart Catholic Church and School, an historic church and school at 503 North Queen Street in Palestine, Texas. It was built in 1890 and added to the National Register of Historic Places in 1979.

There were plenty of cowboy hats for sale.

One of many booths offering goods for sale, including popular Texas stars.

The Scoville Scale measurement of the pungency and heat of chili peppers.