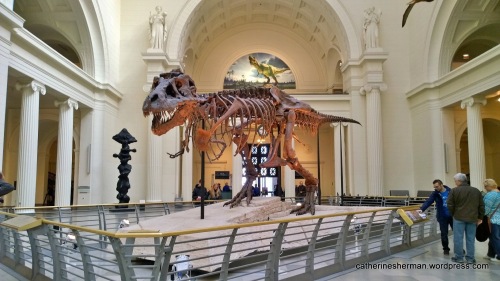 Sue, the Tyrannosaurus rex, in the Field Museum of Natural History, Chicago, Illinois.

When I visit Chicago, Illinois, I like to visit my old friend Sue, the Tyrannosaurus rex. In early April, my husband and I got re-acquainted with Sue when we were in the city for a wedding.  We braved unseasonably cold weather, high wind (well, it is Chicago, the Windy City) and some snow and ice to see the old gal.  She looks pretty good for 67 million years old, although she does admit to some cosmetic help.

When I was refreshing my memory about Sue’s many attributes and history, I was thrilled to read that the T rex mural on the wall behind Sue is by John Gurche, a University of Kansas graduate. I’d met John Gurche years ago while I was at KU and am always happy to discover one of his works. I bought his dinosaur stamps, and of course I never used them on an envelope. (What would happen to the U.S. Postal Service is all of the stamp collectors suddenly used all of their stamps as postage!)  Gurche’s work is featured in museums and in publications such as National Geographic, Smithsonian and the Boston Globe. He was named one of the 2013-14 Distinguished Alumni of the College of Liberal Arts and Sciences at the University of Kansas, the highest honor from the College.

I’m not sure when I’ll see Sue again, so I will get my next fossil fix at the KU Museum of Natural History.  And one of these days I’ll post my story about a dinosaur dig I went to in Wyoming near Newcastle.

About Sue, the Tyrannosaurus rex.