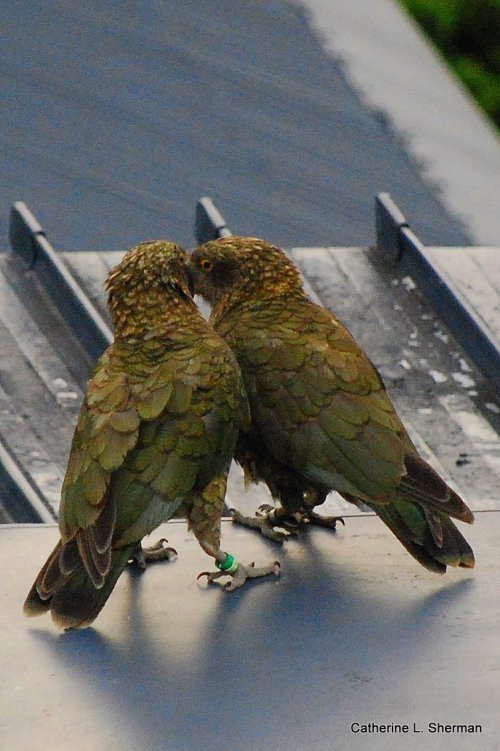 Two Keas parrots conspire on the rooftop of The Hermitage Hotel at Mt. Cook in New Zealand.

My favorite parrots are in the news again!  A Kea parrot has stolen a passport from a tourist visiting New Zealand. ( See the story below.)  The Keas hang out at a tunnel that everyone must pass through to get to Milford Sound.  Everyone stops there, because it’s a one-lane tunnel.  The keas are probably part of an international passport theft ring.  At the bottom is a link to a post I wrote about keas, which includes some great videos (which I didn’t take).

WELLINGTON, New Zealand – Polly wants a passport — and isn’t above stealing one.

A brazen parrot, which spotted a Scottish man’s passport in a colored bag in the luggage compartment under a tour bus, nabbed the document and made off into dense bush with it, the Southland Times newspaper reported Friday.

The bird — a parrot of the Kea variety — made its move while the bus was stopped along the highway to Milford Sound on South Island, and the driver was looking through the compartment. Milford Sound, which runs inland from the Tasman Sea and is surrounded by sheer rock face, is part of Fiordland National Park, a world heritage site and major travel destination.

Police told the newspaper the passport has not been recovered and is unlikely to be located in the vast Fiordland rain forest.

“My passport is somewhere out there in Fiordland. The Kea’s probably using it for fraudulent claims or something,” the passport owner, who did not want to be named, told the newspaper.

A replacement passport from the British High Commission  in Wellington could take six weeks and cost up to $250.

“I’ll never look at a Kea in the same way,” the man was quoted saying.

Kea, the world’s only snow line-dwelling parrot, are widely known as inquisitive birds who appear to take delight in attacking rubber items like windshield wiper blades.

Native to New Zealand, the birds are found only in or near South Island mountains, where they live in high-altitude beech forest and open sub-alpine herb fields that stretch up into the snow line.

Covered mainly in brown and green feathers, they have large flashes of bright orange feathers under their wings.

Two Kea parrots conspire on the rooftop of The Hermitage Hotel at Aoraki Mount Cook in New Zealand. The Kea is thought to be one of the smartest birds in the world and is the only alpine parrot.

IMAGINE THIS SCENE:  A man and a woman are watching “Country Calendar” on the television in their house on a lonely sheep station near Lake Wakatipu in New Zealand.  The woman gets up from the couch to get some tea.  She hears a fainting tapping on the front door.

She peers through the door’s sidelight window and sees a bloody hand smearing the glass.  “Oh, my God, John.”

"This isn't as tasty as that roasted red pepper, pine nut and lamb panini with honey mustard dressing that I stole from those stupid tourists the other day."

John rushes to the front hall.  “What is it?”

John looks through the window.  “Jill don’t open the door.”   He gets a cricket bat from a closet.  He motions to his wife to get back as he opens the door.

The stranger struggles to stand on the porch.  “They took it,” he snuffles miserably.  He weakly lifts his arm.  His shirt cuff  is shredded.

“What did they take?”

“My Rolex,” he cries, collapsing on the porch. “My wife.  Oh, my God, my wife.  They took her jewelry. Her gold earrings.  She’ll die without those.  We didn’t have insurance.”

“Who did this?”  John walks out onto the porch to help the man to his feet.

"I know there's some food in there. You watch the kitchen door whilst I distract the cook."

“They’re coming. Don’t let them in.”  The stranger puts his hands over his head, whimpering.  “I saved for months for that watch. It was so cooool. Now it’s gone…….It isn’t right.  They don’t even need to tell time.”

An eerie sound pierces the air.   “Keaaah!  Keaaah!”  Seemingly out of nowhere, a flock of green birds swoops in, a flash of red under their wings as they dive toward the open door.

A few birds swoop toward Jill.  She barely gets the door closed in time.  The birds flap at the window for a few moments, and then they disappear.  John and Jill help the stranger to a chair.  “It’s too late,” the stranger says.  “You can’t escape them. They won’t stop until they get it all.”

“You’re safe now,” Jill soothes, heading toward the kitchen.  “I’ll get some tea.”

The two men hear a noise, something rustling.  Wings.  Screeching.  They hear Jill scream, “Oh, my God, the kitchen window is open!” 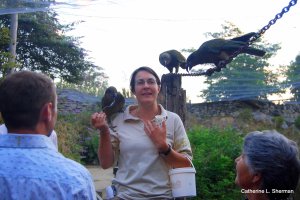 A guide talks about Kea parrots at the Willowbank Wildlife Reserve in Christchurch, New Zealand.

“Cut,” the director calls out.  The actors are relieved. Those Kea really play their parts well.  (It’s all acting, folks!  Keas do like shiny objects, though.)

The birds retreat to their perches, where they get the star treatment they deserve — plenty of mango, figs and even spoonsful of honey.

Wouldn’t this be a great scene for the remake of Alfred Hitchcock’s movie “The Birds” ? A new version of “The Birds” is in the works and scheduled  for release in 2011, maybe in 3-D, with Naomi Watts and George Clooney.  The Kea parrots of New Zealand would be the perfect birds to star with A-listers in the dramatically beautiful country of New Zealand.   Super producer Michael Bay, are you listening!

A flock of these cheeky, brilliant, mischievous and curious parrots could almost take over the world, if they wanted to.  They work well in teams to solve puzzles.  (See videos below.)

Keas are clownishly adorable and pose no real threat to humans.  Fortunately, Keas are more likely to run off with your sandwich, snatch a gold earring or rip the rubber edging from your car.  There are so few Keas now — 1,000 to 5,000 — they are in serious danger of disappearing altogether.  They’d have to be replicated by computer generated images to produce enough Kea parrots to create a menancing flock.  There were tens of thousands of them as recently as forty years ago. They were named Kea by the Maori for the “Keaa!” cries they make. 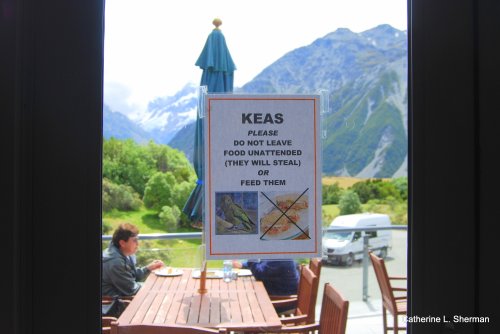 A sign at The Hermitage Hotel at Aoraki Mount Cook in New Zealand warns people not to leave their food unattended or a Kea will steal it.

Their numbers have fallen drastically for a number of reasons, including a bounty that was once placed on them because they do take a bite out of livestock now and then.  They also killed by poison set out to kill possums.  Keas, now protected, are an endangered bird on the South Island of New Zealand, the only place in the world where they naturally occur.  They live in the harsh conditions of the New Zealand Alps, eating a wide range of food from fruit and seeds to other birds and carrion.

Here a Kea flies near Aoraki Mount Cook in New Zealand. Kea parrots are only found in the wild on the south island of New Zealand at higher altitudes.

New Zealand’s spectacular scenery, already featured in the Lord of the Rings trilogy, would be a perfect location for this new version of “The Birds”.  Naomi Watts is rumored to be in “talks” to take the role originally played by Tippi Hedren in the Alfred Hitchcock version of the Daphne Du Maurier short story, originally set in Cornwall. Watts has already starred in King Kong in New Zealand under LOTR director Peter Jackson, so she’s familiar with the terrain. And who wouldn’t want to visit New Zealand again?

The third video is one I took at Willowbank Wildlife Reserve in Christchurch, New Zealand.