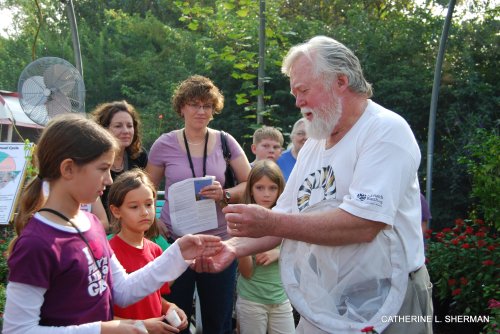 Chip Taylor, right, director of Monarch Watch, shows how to hold a Monarch butterfly for tagging.

One of the highlights of the annual fall open house at Monarch Watch is Butterfly School, in which Chip Taylor, founder and director of Monarch Watch, demonstrates how to catch, hold, tag and release a Monarch butterfly before it begins its migration to its winter home in Mexico.

Chip Taylor shows the students in "Butterfly School" where to place the tag on the butterfly's wing.

The weather for this fall’s event (Sept. 12) was warm and sunny, so the butterflies were very active but with the right technique (wait until they stop to refuel on a flower, don’t chase them!) they were easily captured in a net so that a small tag could be placed on a wing to help to track the butterfly’s migration patterns.  Monarch Watch is on the west campus of the University of Kansas in Lawrence.

Soon these tagged Monarchs will be joining hundreds of millions of other Monarchs in one of nature’s greatest natural wonders.

In North America the Monarchs migrate south starting in August until the first frost. A northward migration takes place in the spring. The Monarch is the only butterfly that migrates both north and south, although no single individual makes the entire round trip.  The Monarchs tagged east of the Rocky Mountains spend the winter in Mexico and start to breed on their trip back home as soon as they encounter milkweed along the route.  This is why it’s so important for people to plant milkweed in their gardens to help the Monarchs along the way. Find out about starting a Monarch Butterfly Waystation by visiting Monarch Watch’s website.  Because of development and agriculture, milkweed is being destroyed in the areas Monarchs have used in the past. Drought and cold weather also reduces the amount of milkweed available. 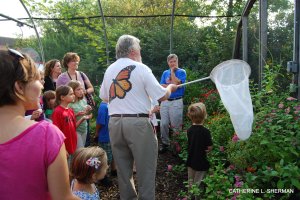 Chip Taylor shows how to sneak up on a butterfly to catch it with a net. Captured butterflies are tagged before being released so that when they are found, the data on the tag can tell researchers about the butterfly's migration.

The tagging students were preparing for the  Jayhawk Audubon Society and Monarch Watch annual tagging event for the public at the Baker University Wetlands along 31st Street between Haskell and Louisiana in Lawrence, Kansas. The annual tagging event is open to everyone, with instructions given at the site.  The 2009 event is scheduled for 7:30 AM until 11:30 AM on Saturday, September 19, 2009.  More information can be found by clicking on the Monarch Watch website in my blogroll at the right.

In 2001, 325 participants tagged nearly 3000 of the estimated 20,000 Monarchs present, and at least 85 of those tagged were recovered at the winter roost sites in Mexico, according to Monarch Watch.  Almost as many were tagged in 2008.  You can view all of the recoveries tagged at these events by searching for Lawrence-tagged Monarchs on the Monarch Watch searchable recovery database on its website.  Click on this to find out more about the tagging process and why it’s done. 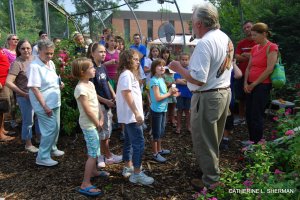 A group gathers in Monarch Watch's biohouse to hear about how to tag Monarch butterflies.

Every year, up to hundreds of thousands of Monarchs stop on their way south to refuel on the nectar from the ocean of yellow Bidens flowers at the wetlands, which is an amazing sight.

Monarch Watch is dedicated to the education about, conservation of and research about Monarch butterflies.  It works closely with schools and with researchers.  Research into Monarch migration is providing extensive information about genetics, for example.

Taylor and others went to the wintering site in Mexico in March 2009.  Here’s part of what Taylor had to say about a new Disney film, taken from the Monarch Watch blog.  It’s very exciting.  “While I enjoyed the entire trip, and this agreeable bunch, I had a side adventure: I spent 4 extraordinary days working with a film crew funded by Disney at El Rosario. It was total monarch immersion, all day every day, from 6AM to 7PM. The film crew was the largest I’ve worked with and there were three cameras going most of the time. The footage will be spectacular and like no other on monarchs to date.Disney has commissioned a series of nature films, and this film about pollination and pollinators is scheduled for theaters in 2010-2011. The working title for the film is “Naked Beauty” – but the bets are the title will be changed in time to something like “Nature’s Beauty: A love story that feeds the world”. The film’s message is important and timely. Nature’s beauty, as represented by numerous pollinators and the fruits, nuts, berries, and seeds that are the products of their efforts, will be skillfully and dramatically presented through the masterful direction and loving eye of the film’s director, Louie Schwartzberg.”

A Monarch butterfly is a beautiful hair ornament -- but just for a few minutes. Photo by Evan Jorn.

I’ve posted several other articles about Monarch Watch and butterflies, which you can find through my search button.  The Monarch Watch site has many articles on the butterfly’s biology, reproductive needs and the The Top Ten Butterfly Facts.  You can also find out how you can raise your own Monarchs.

Wikipedia has links, charts and photographs about the Monarch Butterfly.  Monarchs have spread widely and can even be found in New Zealand.  There’s a white version in Hawaii. 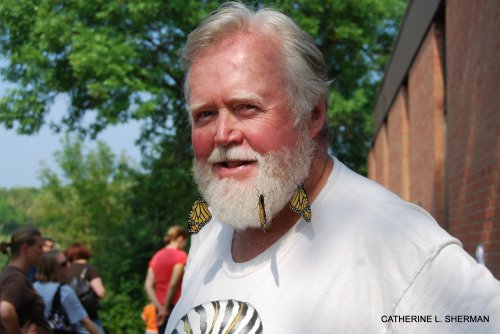 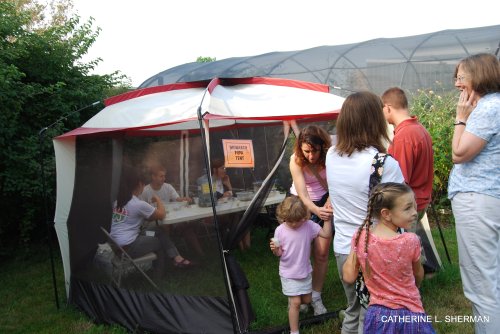 Children received a free Monarch pupa so that they could raise a butterfly at home. 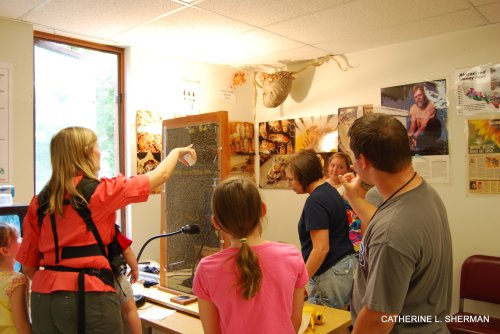 Monarch Watch provides information about other pollinators, such as honey bees. Visitors to Monarch Watch's fall 2009 open house watched honey bees at work in this hive. 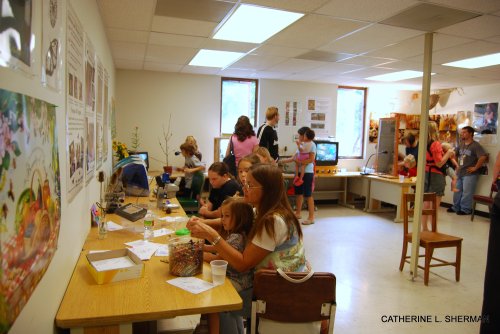 Children and their parents found plenty of fun and educational activities to do at the fall 2009 Monarch Watch open house.

Chip Taylor discusses research into Monarch butterfly migration, which provides insights in a lot of areas of science, including genetics. 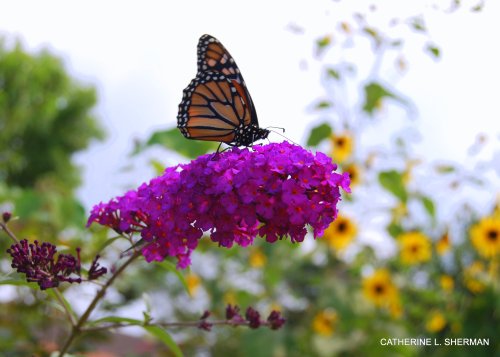 Monarch butterflies are fascinating creatures scientifically, but it doesn't hurt that they are also gorgeous and like to visit beautiful flowers on a lovely late summer afternoon.

A male Monarch butterfly shows off its beautiful wings while perched on a scarlet milkweed in front of the Monarch Watch headquarters in Foley Hall at the University of Kansas.

People get close to Monarch caterpillars at the Monarch Watch fall 2009 open house. 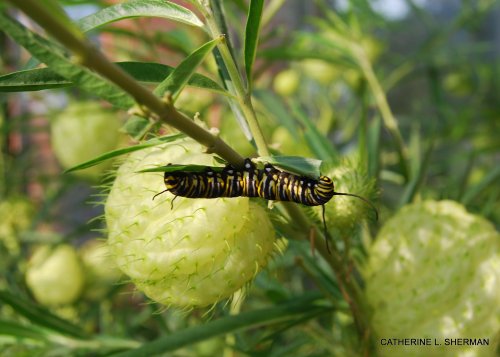 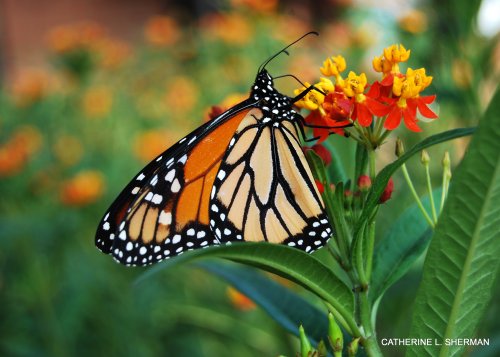 Chip Taylor shows the tagging students what the tag says. Monarch Watch pays for the retrieval of dead Monarch bearing these tags, most of which are found in Mexico near where they spend the winter.

A newly emerged Monarch butterfly hardens its wings before taking its first flight. The process takes a few hours. In the leaf above, you can see the hole made by a caterpillar when it hatched from its egg and ate its first milkweed meal.

Children could get a little exercise playing tossing games while learning about butterflies at the Monarch Watch open house.

Here's where the cycle begins -- the butterfly mating cage at Monarch Watch.

The pollination garden at Foley Hall, the home to Monarch Watch at the University of Kansas.

Here is a Monarch butterfly just minutes from emerging from its chrysalis.

Is it our resident male ruby-throated hummingbird, a juvenile male or a female intruder? I can't tell.

I’m not bored with the hummingbird at our feeder, but he does come often enough that I’m starting to take him for granted.  My husband calls out, “Hummingbird.”  Sometimes, I don’t look up.  I should.  The hummingbird will be leaving soon, and I’ll miss him.

Sometime in mid- to late September, most ruby-throated hummingbirds will begin a long journey, including a nonstop flight over the gulf to southern Mexico for the winter. 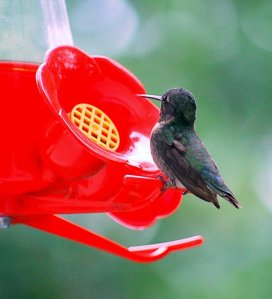 Is it a male or female ruby-throated hummingbird? I'm guessing it's a young male, taking his time at the feeder, daring the older resident male to run him off. What do you think?

Another hummingbird has dashed in for drinks now and then, but it’s not a friendly cocktail party here.  The cock chases the tail of the intruder.  It’s one hummingbird to a territory!  I took some photographs this week of what may be a new hummingbird.  It didn’t look like our resident ruby-throated hummingbird. In the photograph, I don’t see any red at the throat, which is the sign of the male, so it might be an invading female. Or it could be a juvenile male that doesn’t yet have a red neck. The females have a rounded tail with white tips, the male’s tail is forked with no white. The males and females meet up for mating, but after that they don’t get along.  Both males and females have beautiful iridescent blue green backs.