In 2014, a friend and I drove to Santa Fe, New Mexico from Kansas City, traveling on two-lane highways in April. We took a different two-lane highway route on our return, including Route 66 and the Santa Fe Trail.

I’ve lived in the eastern half of Kansas most of my life, have traveled throughout the world, but there were many areas within a day’s drive or two of my house that I’d never seen.  It was a very enjoyable and fascinating trip. Although our primary destination was Santa Fe, I found the stark beauty of the High Plains on our route to be an unexpected pleasure.

In book club we recently read Timothy Egan’s  “The Worst Hard Time” about the Dust Bowl in the 1930s in southwestern Kansas, the Oklahoma panhandle, northeastern New Mexico and southeastern Colorado. which prompted me to revisit my photographs from that trip, which was a journey through that region. Although the area experienced a very harsh time, there is plenty to see of beauty and history to see there now.  We didn’t stay long, unfortunately, so I’d like to return and see more of the area, including the museum in Clayton, New Mexico. Perhaps, I could book a room in the historic Eklund Hotel, where my friend and I ate a delicious lunch in the beautifully decorated 19th century dining room. Another museum to visit would be the XIT Ranch Museum in Dalhart, Texas.

For more about the XIT Ranch Museum, click here. 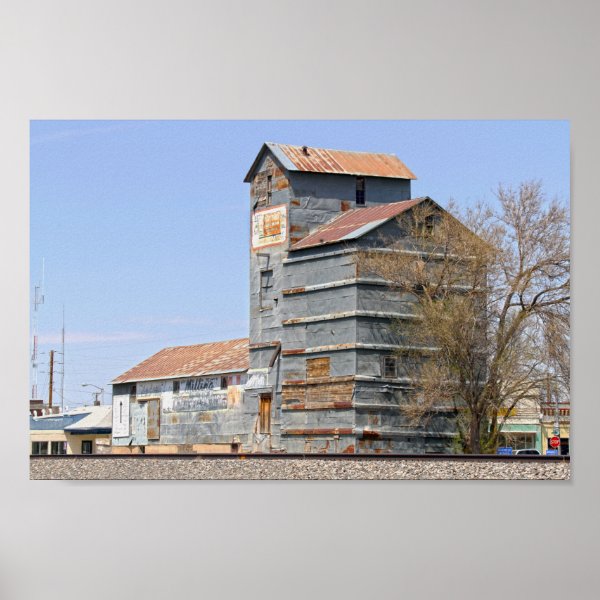 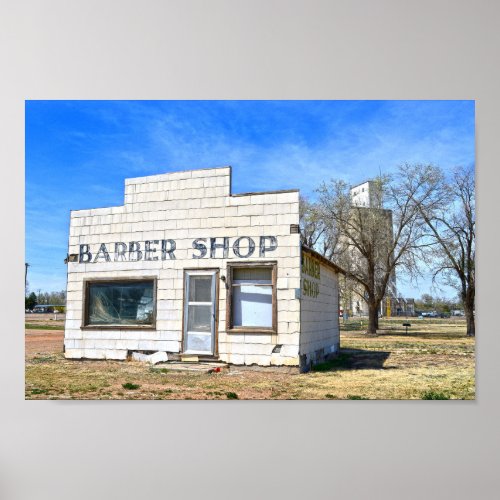 You’ll probably wait a long time for a haircut at this Oklahoma Panhandle Barber Shop, which seems to be permanently closed. In the background is a grain elevator. The stand alone building looks desolate, but next door is a thriving full service gasoline station next door that serves a busy highway.

The Miraculous Stairway in the Loretto Chapel 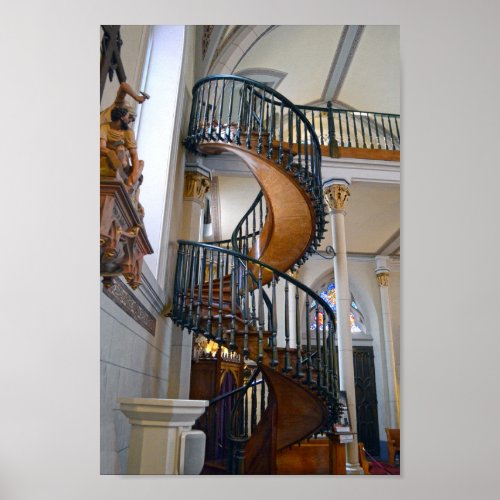 I took these photographs in April 2014 when I visited the Loretto Chapel in Santa Fe, New Mexico. The chapel is famous for its “miraculous” staircase. The staircase has two 360-degree turns and no visible means of support.

When the church was completed in 1878, there wasn’t enough room for conventional stairs, and the Sisters of Loretto didn’t want to climb a ladder in the long skirts of their habits. They prayed for a miracle, the legend goes, and a mysterious carpenter came, who built the staircase. He asked for no pay and disappeared as mysteriously as he came. His identity is still unknown, and even some of his methods in building the freestanding spiral stairway have not been discerned, so it is indeed a miracle still. To read more about the Loretto Chapel and its staircase, click on the links beneath the photographs.

The bottom link is about Archbishop Jean-Baptiste Lamy (October 11, 1814 – February 13, 1888). The archbishop commissioned the building of the Loretto Chapel. He was a French Roman Catholic prelate who served as the first Archbishop of Santa Fe, New Mexico, in the United States. The American writer Willa Cather’s novel “Death Comes for the Archbishop” is based on his life and career.

The miraculous staircase leads to the choir loft at the back of the Loretto Chapel, Santa Fe, New Mexico.

Musicians practice for Holy Week events at the Loretto Chapel in Santa Fe, New Mexico, in this photograph from April 2014.

About the Loretto Chapel Staircase

About the Loretto Chapel 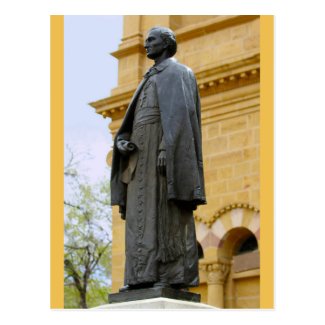 Daffodils, blooming early in my neighborhood this year (February 2016). Always a cheerful sight.

However, that doesn’t stop me for wishing for the flowers of Spring! I’ve already seen daffodils in bloom in the neighborhood, so I’ve gotten part of my wish. Here are some photos of blooms from previous Springs from my travels in different parts of the country.

Gazebo on Azalea Trail in Tyler, Texas. For more Azalea Trail photos, click on the link below.
https://catherinesherman.wordpress.com/2013/04/29/the-azalea-trail-in-tyler-texas/

My luck ran out.  My Nokia Lumia 1020 cell phone fell out of my pocket and hit the floor of my garage.  The screen shattered. I never put my phone in my pocket, but we were having a garage sale and it seemed like a good idea at the time. (Yes, I swore I’d never have another garage sale. When will I ever learn?)

At first I thought the lines on the screen were a real cobweb, not a web of cracks. I was in disbelief and then angry with myself. I’ve gotten very attached to that phone. It sleeps next to me (actually it never sleeps) charging on my bedside table.

This is a re-enactment the next morning of where I found my phone at a Taos, New Mexico, motel. My phone had fallen out of my handbag as I ran to escape the rain. I didn’t miss my phone until I decided to charge it an hour later. Then I couldn’t find it. My friend Lynn and I looked for hours, not sure where I had lost it. Later, I found it here, on the railing to the stairs. It was wet, but it still worked.

This is not my cell phone’s first escape attempt. It leaped from my purse in Taos, New Mexico, as my friend Lynn and I were rushing from the car to the covered portico of our hotel in the rain after dinner at a lovely restaurant on Easter.

It was our last night in New Mexico of our week-long trip. I wondered aloud what I would leave behind on this trip. There’s always something that goes astray. A toothbrush, some shoes, hat, gloves, scarf, jacket, a nightgown, a book. I didn’t realize that I’d already lost something — my phone! I discovered that the little dickens had gotten away when I looked for it so I could charge it. Lynn and I searched everywhere in the room, the parking lot, the car, the streets, even went back to the restaurant — twice — just before closing. Lynn called my phone five or more times, and we never heard it ringing. (Thanks, Lynn!) I roamed the parking lot in the rain, I talked to the desk clerk.

Finally, we gave up. I was already on the fourth stage of grief, when I decided to give the search one more effort. I remembered that I’d found a couple of phones in the past, one I had given to the desk clerk of our motel (it turned out to be hers), and the other I had picked up from the street and set on the curb. Maybe someone had placed my phone in a safer place? Minutes later I saw it, sitting on a stair post, sprinkled with rain drops but still in working order. I was so relieved.   How quickly we get dependent on these devices.  My grandparents had a party line phone, which was shared with several neighbors.

I was able to get my screen replaced locally.  It wasn’t cheap. I obviously need a case for it.  A friend demonstrated the protective qualities of his case by dropping his phone on the floor. No damage.

As I looked at my shattered screen, this song came to mind. Now I can’t get it out of my head.

Here a cell phone takes the #ALSIceBucketChallenge.  I can confirm from personal experience that it’s darned cold! Writing the check was much easier. Paying for the phone screen repair is also going to be a shock.

Rey Montez is a handsome man, but you’ll have to visit his gallery in Truchas, New Mexico, to see for yourself. He doesn’t like to be photographed! His Montez Gallery showcases a variety of art, including Spanish colonial art, religious art and contemporary art.

On our recent photography tour, Lynn S. and I were heading to Taos, New Mexico, on the High Road on Easter Sunday, not thinking any galleries or shops would be open, but still hopeful.  If all doors were shut, there would always be the gorgeous mountain scenery to photograph and maybe the exterior of a church. Apple trees were in bloom.  An occasional lilac bush was a burst of purple along the road side.

We entered the little mountain town of Truchas, (Lynn at the wheel at the wheel of her car; I feel bad for not doing any driving…) on the lookout.  We saw a little adobe church with a tin roof and tin bell tower.   A sign said: The Montez Gallery.  The church was now a gallery. Cars were in the parking lot.  Could it be open?

The Montez Gallery celebrated its 25th year in 2014. The gallery is in an old church in Truchas, New Mexico.

Not only was the Montez Gallery open, but there was a reception for the gallery’s 25th year. Cake, coffee, cookies!  The owner, Rey Montez, told guests about  the art featured in his gallery and the history of the people in the area.  His family has been in northern New Mexico for centuries. You can read more about him, the gallery and collectors in the links below.  Many notable people have made the same stop at the Montez Gallery.

Nuestra Señora del Rosario (Holy Rosary) Mission Church was built in 1764 in Truchas, New Mexico. It is open in June, July and August.

We also found an old mission church in Truchas,  Nuestra Señora del Rosario (Holy Rosary) Mission Church, which was built in 1764. It’s open in June, July and August. We visited the town in April, so we weren’t able to go inside to see the two large altar-screens (reredos) by the renowned santero Pedro Antonio Fresquis.

Cake, coffee and cookies for 25th anniversary of The Montez Gallery.

Truchas was established by a Spanish Royal Land grant in 1754. The full name of the town is Río de las Truchas, which means “river of trout.”  The first settlers built irrigation ditches from the trout-filled river to bring water to the town, which is at an elevation of 8,000 feet.  Truchas is mentioned in Willa Cather’s 1927 novel “Death Comes for the Archbishop”; Book Two Chapter 2. Robert Redford’s “The Milagro Beanfield War” (1988) was filmed on location in Truchas.   Several Truchas residents had roles in the movie.

Here is a view of Truchas, New Mexico, just off of the road through the town, showing Truchas Peak.

On a hillside, stones spell out the name of the city of Truchas.

The Montez Gallery is in an old church. Here’s the church bell tower.

About Móntez Gallery, Part One.

About High Road Artisans in Truchas.

Pranksters have placed UFO stickers on cattle crossing signs on US Highway 68 between Santa Fe and Taos, New Mexico.

My friend and fellow photographer Lynn and I recently returned from a thousand-mile (probably more) photography road trip, starting from Kansas City and making a round trip through New Mexico. I took about 4,000 photos, some great, some lousy, most were fun, especially this one of a UFO sign on a cattle crossing sign on Highway 68 from Santa Fe to Taos.

Pranksters placed the stickers on signs, which officials remove and then more stickers re-appear.   Click the link if you want to know the less humorous history behind the stickers… (I don’t recommend it.) Cattle Abductions.