NASA Astronomy Picture of the Day 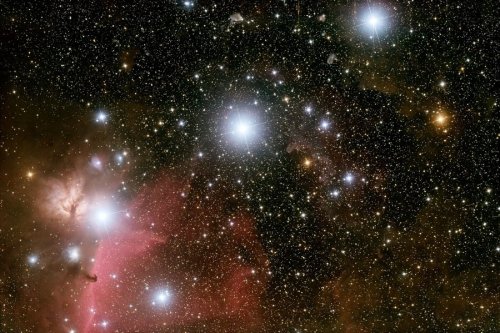 So many people (ok, five…)  told me they liked the photograph at the top of my “Starry, Starry Night” post (that photograph is from flickr.com) that I’m posting a NASA website (see below) that archives a photograph each day of an astronomy feature.  I chose Orion’s Belt to illustrate this post, because it’s my favorite constellation — probably because it’s easy to identify.  Also,  the night sky here in Kansas in the winter, when Orion appears, is usually clear.
The NASA Astronomy Picture of the Day website explains the photograph above:  Alnitak, Alnilam and Mintaka are the bright bluish stars from east to west (left to right) along the diagonal in this gorgeous cosmic vista taken by Martin Mutti. Otherwise known as the Belt of Orion,  these three blue supergiant stars are hotter and much more massive than the Sun. They lie about 1,500 light-years away, born of Orion’s well-studied interstellar clouds. In fact, clouds of gas and dust adrift in  this region have intriguing and some surprisingly familiar shapes, including the dark  Horsehead Nebula and Flame Nebula near Alnitak at the lower left. The famous Orion Nebula itself lies off the bottom of this star field that covers about 4.5×3.5 degrees on the sky.  Mutti took this image in January 2009 with a digital camera attached to a small telescope in Switzerland.  It better matches  human color perception than a more detailed composite taken more than 15 years ago.