The California Tunnel Tree is the last living tree standing in Yosemite National Park with a tunnel cut through it. The tunnel was cut in 1895 to allow coaches to pass through it, although they could have gone around it. The tunnel was mainly a marketing scheme to attract visitors to the grove. Tunnels are no longer cut into trees, because it weakens the tree. The Wawona Tunnel Tree fell in 1969.

In September 2012, my husband and I made a pilgrimage to Mariposa Grove in Yosemite National Park in California to see the giant sequoias (Sequoiadendron giganteum), the biggest trees in the world. This blog post is my virtual tree hug.

Standing among the massive sequoia trees in Mariposa Grove, I could easily understand how this forest became the inspiration for the national park system.  Mariposa Grove, near the southern entrance of Yosemite National Park, contains about 500 mature sequoia trees. Giant sequoias are thought to be the largest living things on Earth and are among the oldest, too, some possibly older than 3,000 years. 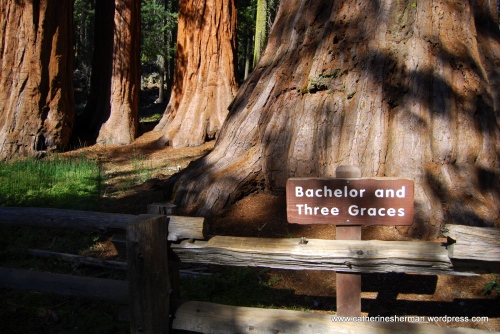 The Bachelor and Three Graces: Four sequoia trees, three of them growing very close together, with the “shy” bachelor standing a little apart from the girls. Their roots are so intertwined that if one falls, they would all likely crash down.

Only some living specimens of the ancient bristlecone pine are older than the sequoia.  Some bristlecone pines, found in the mountains east of Yosemite and at Great Basin National Park in Nevada, are more than 4,600 years old.

Sounds as if I need to plan a trip to see the bristlecone pines, too.  I also need to re-visit the coastal redwoods.  The tallest tree in the world is the Hyperion, a coastal redwood (Sequoia sempervirens) along the coast of northern California.

I took a lot of photographs of the giant sequoia, but my photographs can’t convey the majesty of these awesome giants. You must visit Yosemite to experience the sequoia yourself! (But humor me and look at my photographs anyway.)

In the midst of the U.S. Civil War in the early 1860s, many people, concerned about commercial activities in the Yosemite region, pushed the U.S. federal government for protection of the area. The 38th United States Congress passed a park bill, which was signed by President Abraham Lincoln on June 30, 1864, creating the Yosemite Grant. This is the first time the U.S. federal government had set aside park land specifically for preservation and public use, setting a precedent for the 1872 creation of Yellowstone as the first national park.

The small egg shaped and egg-sized pine cone at the front left belongs to the Giant Sequoia, the largest living entity on earth. The long pine cone comes from a Sugar Pine, which produces the longest pine cones in the world. The three round pine cones in the back may be cones from the Jeffrey Pine. These pine cones are all from northern California.

“In May 1903, President Theodore Roosevelt camped with Muir near Glacier Point for three days. On that trip, Muir convinced Roosevelt to take control of Yosemite Valley and Mariposa Grove away from California and return it to the federal government. In 1906, Roosevelt signed a bill that did precisely that,” according to a Wikipedia account.

The Giant Sequoia named Grizzly Giant is estimated to be from 1,900 to 2,400 years old and is the oldest tree in the grove. It has a volume of 34,010 cubic feet and is thought to be the 25th largest tree in the world. 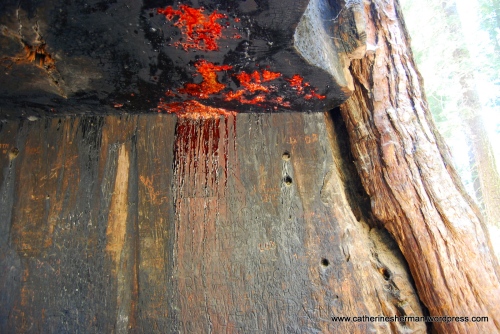 Sap oozes in the giant sequoia tree known as the California Tunnel Tree in Mariposa Grove in Yosemite National Park. The bark of the giant sequoia is nearly resistant to fire, because the sap is water-based and non-resinous. The sap contains a chemical called tannic acid, which protects the tree from fire, insects and bacteria.

The Faithful Couple are two giant sequoia that grew so close together that their trunks have fused together at the base, which is an extremely rare occurrence. 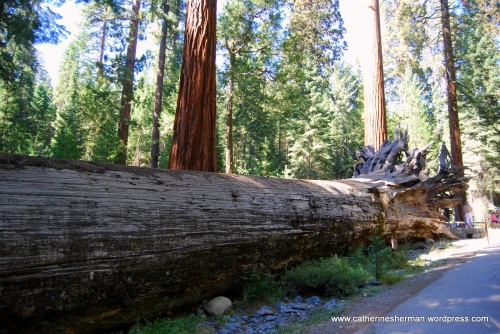 The Massachusetts tree, one of the most famous trees in Mariposa Grove, fell in 1927. Tannic acid in the wood preserves the tree from decay, which is also why sequoia was such a popular logging wood. 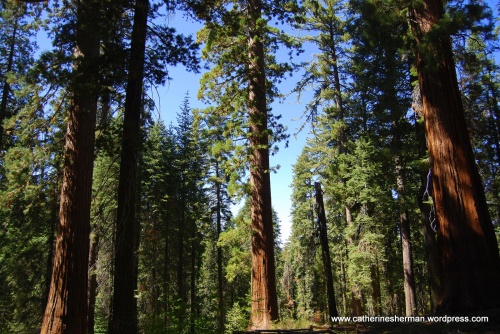 A photograph can’t convey the massiveness of these giant sequoia trees in Mariposa Grove of Yosemite National Park.

Numerous fires throughout the decades nearly severed the trunk of the Clothespin Tree, creating a space in it large enough for a pick-up truck to drive through.

Here’s a collage of some of my Yosemite National Park photographs.