A bull moose stands in Sprague Lake in Rocky Mountain Park at dawn in late September 2019. The moose seems to be posing for the many photographers who lined the lake. I was lucky to be one of them, thanks to my friend Lynn who drove me there. She also took some great photographs.

Moose (Alces alces) are the largest members of the deer family. On average, an adult moose stands between five and seven feet high at the shoulder. Large males can weigh as much as 1,500 pounds while females are roughly three-quarters of this size.

Where to see moose in Rocky Mountain National Park, Colorado. 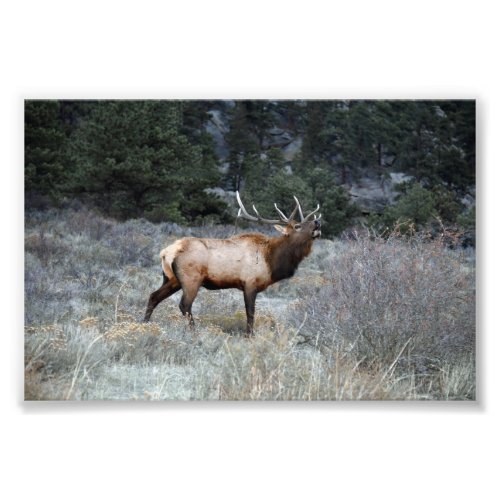 This moose stared back when I was taking its photo in Colorado.

Swedish photographer Björn Törngren posted some photographs of moose in Sweden on his blog, which reminded me that I hadn’t posted my moose photographs from a trip to Colorado in 2012.

When my husband and I visited the Brainard Lake Recreation Area last year, we were surprised to see moose in Colorado.

Moose are relatively new to Colorado.  According to the National Park Service, historical records dating back to the 1850s show that moose were probably only transient visitors to the area that is now Rocky Mountain National Park.  In 1978 and 1979, the Colorado Division of Wildlife transferred two groups of moose (a dozen each year) from the Uintah Mountains and Grand Teton herds to an area just west of the Never Summer Range near Rand, Colorado.  The moose have prospered in Colorado.  There are now more than 2,300.

All of the moose we saw had antlers, so they were all males.

Wildlife enthusiasts set up to photograph a herd of moose at the Brainard Lake Recreation Area in Colorado.

A boy keeps a fairly safe distance from moose grazing near Brainard Lake in Colorado. Moose are dangerous and unpredictable and often charge.

This is one of my better shots. The moose were far away and were eating most of the time in tall vegetation.

A herd of moose line up to graze in a marshy area at Brainard Lake Recreation Area in Colorado.

Herd of moose graze near Brainard Lake in Colorado.

Story about moose in Colorado.

Wikipedia: About the Moose.

Click on the thumbnails to view a full-size slide show.

This is one of my better shots. The moose were far away and were eating most of the time in tall vegetation.

A herd of moose line up to graze in a marshy area at Brainard Lake Recreation Area in Colorado.

Wildlife enthusiasts set up to photograph a herd of moose at the Brainard Lake Recreation Area in Colorado.

This moose stared back when I was taking its photo in Colorado.

Herd of moose graze near Brainard Lake in Colorado.

A boy keeps a fairly safe distance from moose grazing near Brainard Lake in Colorado. Moose are dangerous and unpredictable and often charge.

A bighorn sheep ewe, on the right, prepares to lead the herd on its trek across a highway in Rocky Mountain National Park. The ewe waits until most of the herd members line up and then she begins the procession. The sheep make the journey each day to and from two lakes in a meadow in the park.

Not far from Estes Park in Colorado, bighorn sheep graze in a meadow near two lakes, “Sheep Lakes,” in Rocky Mountain National Park. The herd makes its way to the lakes from the mountainside each morning and then returns to the mountainside in the late afternoon. It’s a beautiful commute. Park rangers and volunteers manage the tourists and the cars on the narrow highway to allow the sheep safe passage.

When the bighorn sheep are ready to cross the highway, park rangers and volunteers clear the road. The sign says no walking, but it also means no parking. This Hummer driver was confused!

My husband and I were among the gawkers in early August for the sheep’s late afternoon procession back to the mountains. I joined the paparazzi jostling for a view from the packed parking lot. Because we had to stand well away from the sheep, I envied photographers with big lenses. One woman pointed to a female sheep hurrying back across the meadow to the herd at the closest lake. Where had the ewe been? What had she been up to? Her lamb ran out to her and then trailed after her. “Mommy, where did you go?”

I saw one sheep move up the hill from the lake, and a few stood behind her. Soon, most of the herd was behind her. She waited there, alert, watching us silly humans in the parking lot. Even though we were probably a hundred yards away (I’m bad at estimating distances), she was wary. The rangers and volunteers make sure humans stay back because sheep can be easily stressed. However, later, we saw bighorn sheep grazing by the side of the highway along Big Thompson River, butting heads and knocking each other into the road. They didn’t seem bothered by the traffic at all. I was worried for them!

Eventually, the entire herd at Sheep Lakes gathered behind the lead ewe and then the sheep made their way across the road, where traffic had been cleared. Of course, just as with humans, one grazing sheep was oblivious to the departing herd. She looked up, saw she was alone, and then bolted to catch the herd.

You can click on all of the photos to get a better look. You’ll need to backspace to return to this page.

A bighorn sheep lamb nurses from its mother as the herd lines up and prepares to return to the hillside after a day in the meadow.

A crowd gathers to watch and photograph the bighorn sheep as they graze at Sheep Lakes in Rocky Mountain National Park. The most popular time is when the sheep migrate to and from the hillside over the meadow, which they do once a day.

On the left, a ewe hurries back across the meadow to the herd. In the upper right, her lamb rushes out to greet her. “Mommy, where did you go?” In the bottom right, the lamb follows after its mother.

Bighorn sheep graze on the hillside along the Big Thompson River in Colorado.

Here is a section of a map showing the Sheep Lakes area, where a herd of bighorn sheep graze every day.