To commemorate the 100th anniversary of the end of World War I on Nov. 11, 1918, a light installation of scarlet poppies, movies and information, “Peace and Remembrance,” was projected on the Liberty Memorial for nine nights (Nov. 2-Nov. 11, 2018), honoring the nine million soldiers who died in the war.

In Flanders’ fields the poppies blow
Between the crosses, row on row,
That mark our place: and in the sky
The larks, still bravely singing, fly
Scarce heard amid the guns below.

We are the dead. Short days ago
We lived, felt dawn, saw sunset glow,
Loved and were loved, and now we lie
In Flanders’ fields.

Take up our quarrel with the foe;
To you from failing hands we throw
The torch; be yours to hold it high,
If ye break faith with us who die
We shall not sleep, though poppies grow
In Flanders’ Fields.

Although, snow was forecast, a friend suggested we make a trip to the final night (Nov. 11, 2018) of the Poppy Display at the Liberty Memorial in Kansas City, Missouri, a 45-minute drive. I was reluctant to go, but I’m so happy that we did. It was a very moving experience. And the snow waited until after we got home. The Liberty Memorial is part of the National World War I Museum and Memorial of the United States.

Although The National World War I Museum and Memorial is far from the battle zones of World War I, few Americans were untouched by the sacrifices made in that war. My grandfather, a farmer in South Dakota, was deployed to France at the end of World War I. Fortunately, he came home. 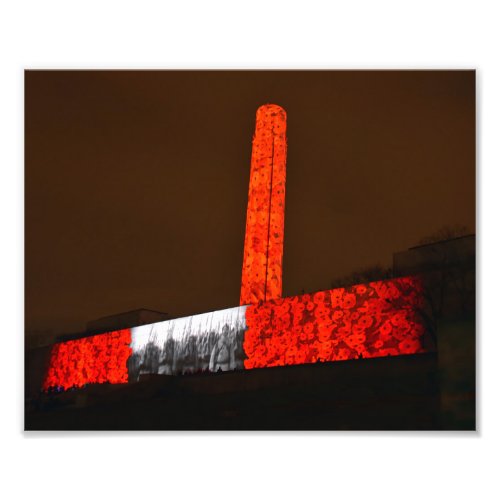 According to the National World War I Museum and Memorial Website: “For the nine days leading up to the Armistice, the official WWI memorial of the United States was illuminated with a nearly 55 million pixel, 800,000 lumens display featuring more than 5,000 poppies each evening in a massive and moving light installation. Every 15 minutes, a special presentations of images, footage and details about World War I will appear. Peace and Remembrance marks the centennial of the Armistice of 1918 that brought an end to WWI, with each day of the installation leading up to the Armistice signifying one million of the total nine million combatant deaths of the conflict.”

Opened to the public as the Liberty Memorial museum in 1926, the National World War I Museum and Memorial.was designated in 2004 by the United States Congress as America’s official museum dedicated to World War I.

In 2004, construction started on a new 80,000-square-foot (7,400 m2) expansion and the Edward Jones Research Center underneath the original memorial. The year that this was completed, Liberty Memorial was designated a National Historic Landmark (September 20, 2006)

In the spring of 1915, shortly after losing a friend in Ypres, a Canadian doctor, Lieutenant Colonel John McCrae was inspired by the sight of poppies growing in battle-scarred fields to write a now famous poem called ‘In Flanders Fields’. After the First World War, the poppy was adopted as a symbol of Remembrance.

The inspiration behind the poppy as a symbol of Remembrance.

Commemoration of the 100th Anniversary of the end of WWI.

About the National World War I Museum and Memorial.

Scarlet awaits visitors in her beautifully decorated room at Wayside Waifs. As beautiful as the "hug" room is at the shelter, she wants a forever home.

As told to Michelle C. at Wayside Waifs by Scarlet.  Michelle writes many of the biographies of the cats at Wayside Waifs, a no-kill animal shelter for cats, dogs and small animals in Kansas City, Missouri.

I didn’t write Scarlet’s romantic biography above, but I did take her portrait, seen below.  I wrote this limerick in honor of the wonderful kitties in need of homes at Wayside Waifs.  If you think I’ve turned into a crazy cat lady, you’re right!

There once was a kitty from Wayside

Who groomed her fur with great pride.

When visitors came to call

Kitty knew how to enthrall

Soon finding a forever home in which to abide.

The last line is a little awkward.  Any suggestions?  I’d love to read any limericks or poems you might want to add in the comments. If you want to adopt a dog or cat from Wayside Waifs, click on Wayside Waifs.

Scarlet relaxes in her Hug Room.