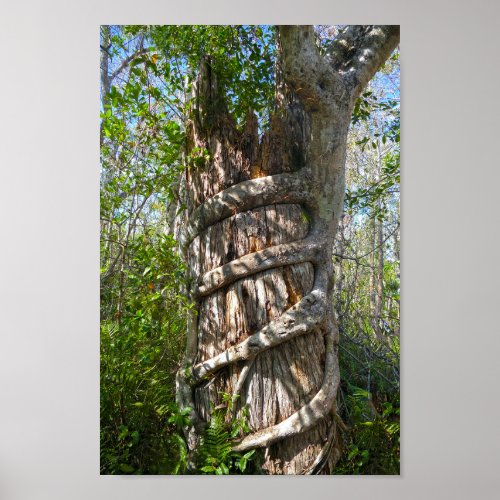 Each of the 750 fig tree species found throughout the world are pollinated by a wasp specific to each fig, according to the Big Cypress National Preserve official website. The fresh waters of the Big Cypress Swamp, essential to the health of the neighboring Everglades, support the rich marine estuaries along Florida’s southwest coast. Protecting over 729,000 acres of this vast swamp, Big Cypress National Preserve contains a mixture of tropical and temperate plant communities that are home to a diversity of wildlife, including the elusive Florida panther.

The Fascinating Strangler Fig of Florida.
Click on the thumbnails to see a full-size photo.

Living at the Edge of an Active Volcano

This bouquet of anthurium and ginger flowers  is a gift to Pele, the Hawaiian Goddess of fire, lightning, dance and volcanoes.  The bouquet was left at the edge of the summit caldera of Kīlauea in Hawaii Volcanoes National Park on the Big Island of Hawaii.  Kīlauea is one of the Earth’s most active volcanoes and is considered one of its most dangerous. Kīlauea and its Halemaʻumaʻu caldera were traditionally considered Pele’s sacred home, and Hawaiians visit the crater to offer gifts to the goddess.

My husband and I visited Hawai’i Volcanoes National Park in February 2011, but we were a month too early for the latest big show at Kīlauea when a crater floor collapsed in early March.  Scientists reported lava blasts 65 feet high in the volcano, and more than 150 small earthquakes have hit the region since the collapse. 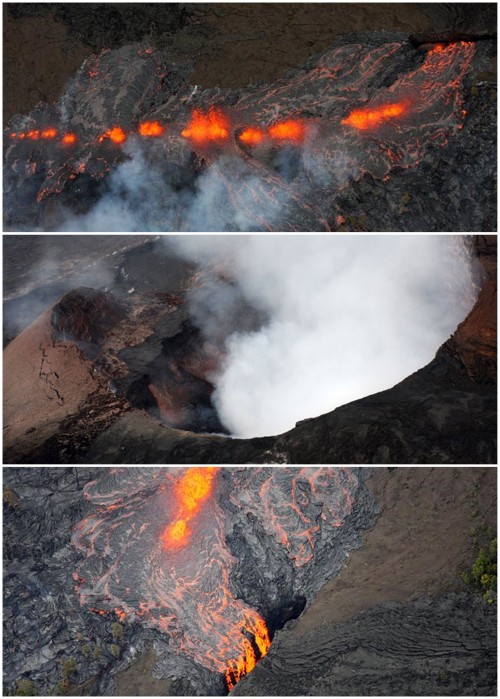 Despite the danger, or perhaps because of it, Kīlauea is the most visited tourist site in Hawaii.  From the house where we stayed in Hilo, we watched a new cruise ship arrive every day full of  tourists who were bussed to the volcano for a quick visit.

Steam rises from the summit crater of Kilauea Volcano in early February 2011. This is a view from the Thomas A. Jaggar Museum observation deck.

The crater appears harmless from the observatory deck at the Thomas A. Jaggar Museum, but the volcano can erupt suddenly as Hawaiians discovered in  1790 when a group was caught in an unusually violent eruption. Many were killed and some of their footprints in the lava can still be seen. 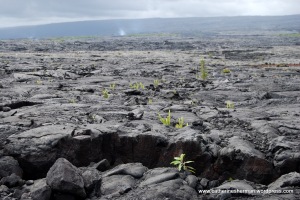 Plants take hold in a relatively recent lava flow west of Kalapana, Hawaii. This lava moved into a neighborhood of houses, destroying some and isolating others. You can see a plume of steam from the volcano in the background.

The Pu’u O’o cone now erupting so spectacularly has been continuously erupting in the eastern rift-zone since 1983, making it the longest rift-zone eruption of the last 200 years. 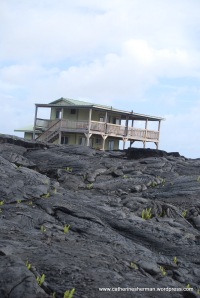 Lava surrounded this house, leaving it intact, but it has been abandoned.

When we visited Kīlauea, we didn’t see any activity other than a little steam in the summit crater, a hint of red in cracks on the crater floor and a parade of steam vents along the road. There was a faint whiff of sulfur in the air.  (If you want really sulfurous air, you need to visit Yellowstone National Park.)  Okay, I was disappointed.   I was hoping for a quivering red-hot river of lava. I wanted spurting fountains.   I’m sure any area with active eruptions and toxic gases would be kapu (forbidden) to tourists.  I was hoping for a sudden lava spurt before rangers herded the tourists to safety.
One of the roads in the park was closed because of recent lava flows, and now with the most recent eruptions more of the park is closed.  The closed road used to continue to another entrance to the park near the town of Kalapana, but that part of the road is now covered by a lava flow.

We drove to Kalapana, where lava has flowed into neighborhoods as recently as a month earlier, destroying some homes.  Steam rose from the most recent flow. Homes are surrounded by the mounds of black lava flows, some are still inhabited, others abandoned. 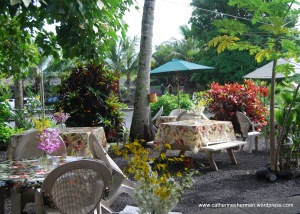 Bouquets of orchids adorn every table at this Kalapana cafe, set in a lush tropical forest. Just a few miles away, lava has destroyed the forests and 200 homes in recent years.

Just a few miles away from the area of damaged and lost homes, people live in the lush tropical town of Kalapana. You can sit among the palm, banana and mango trees, surrounded by hibiscus shrubs, without a hint that Kīlauea rages just beyond the treetops.  What is it like to live in paradise with the possibility of destruction — literally hellfire and brimstone — so real?
The Kalapana area gained notoriety when the 1990 Kīlauea lava flow from the Kupaianaha vent destroyed and partly buried most of the town and some nearby subdivisions. The lava flow that destroyed Kalapana erupted from the southeast rift zone of Kīlauea. Along with the destruction of Kalapana were those of the nearby town of Kaimū and Kaimū Bay, both of which now lie buried beneath more than 50 feet of lava. More than eight miles of highway and at least 200 homes and other structures have been destroyed by lava since the mid-1980s. The lava flow also created a new coastline. Since 1983, several hundred acres of new land has been added to the Big Island. 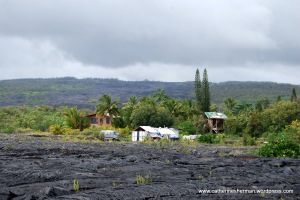 People live at the edge of the lava flow from Kilauea.

Hawai’i Volcano Fast Facts:
Kīlauea is one of five shield volcanoes that form the island of Hawaii, which is the youngest of the Hawaiian islands.  The volcanoes erupted somewhat sequentially, one overlapping the other. These volcanoes are (from oldest to youngest):

Kīlauea is the second youngest of  the volcanoes that have created the more than 100 islands in the Hawaiian archipelago, as the Pacific Plate moves over the Hawaii Hotspot.  Lōʻihi Seamount is the newest volcano in the chain.  It lies 22 miles off the southeast coast of the Big Island at 3,000 feet under sea level. 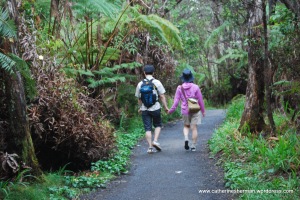 A couple walks on a trail near the Thurston Lava Tube in Hawai'i Volcanoes National Park. The terrain in the park ranges from lush rain forest to shrub land to dry almost desert-like conditions.

Kīlauea means “spewing” or “much spreading” in the Hawaiian language, referring to its frequent outpouring of lava.  About 1,000 gallons of molten lava flow out of active vents every second.  Nearly 2 billion cubic yards of lava rock have come from Kīlauea since its current eruption period began in 1983.
About Hawai’i Volcanoes National Park. 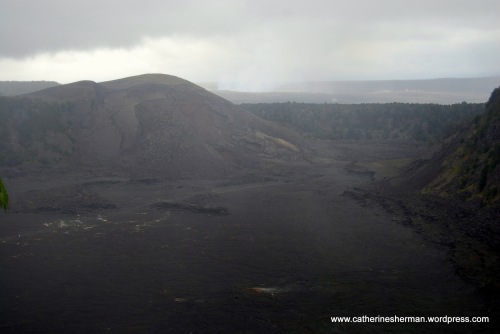 Kīlauea Iki trail traverses Kīlauea Iki Crater.  Click on the photo to get a full-size view of the crater, taken from Kīlauea Iki Overlook.  You can see a glowing red vent issuing a plume of steam on the crater floor. 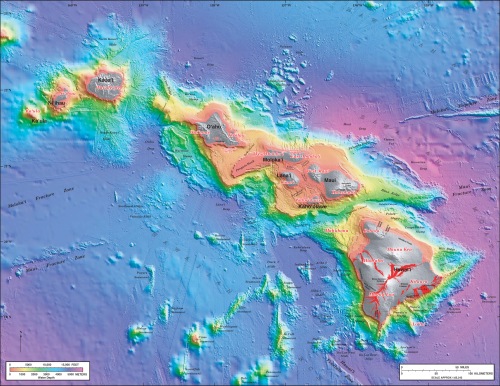