There Will Be Blog

The mini-van’s thermometer shot up to 94 degrees as we left leaf-shaded suburbia.  We hurried (careful not to exceed the speed limit) into the city, eager for a soft seat in a cool theater at a late afternoon movie, just before the higher evening prices kicked in.  We chose “Gonzo,” a documentary about Hunter S. Thompson, a man more than a decade older than us who chronicled our generation in a way we had not quite experienced ourselves.  We were happy to go along for the trip, even though we weren’t hurtling down a highway in a convertible Cadillac, fueled on Wild Turkey and weed ala Thompson.  We bought our tickets, fumbled for seats in the dark and settled in. 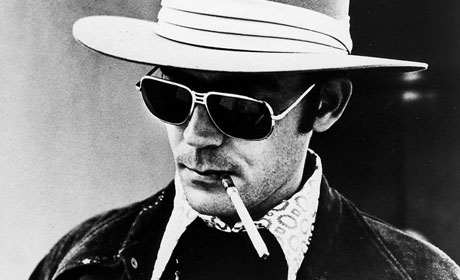 Hunter S. Thompson was like an early blogger.  Although his words were published — not instantly blasted to the public in bytes — the impact was almost as immediate.   He created, or at least perfected, personal, interactive journalism that shaped the news from his days of living among the Hell’s Angels and Merry Pranksters to dining with presidential candidates.

For the 1972 presidential campaign, he typed his words on the campaign trail at the last minute and fed them into a primitive fax machine, while the production staff at Rolling Stone magazine waited for these last pages, usually hours after the printing deadline.

I was a student journalist during the 1972 campaign.  I have no copies of the words I wrote that were printed in the student newspaper, but I’m sure they had no long-term or even short-term impact.  I just felt lucky to be the one chosen to document George McGovern’s visit to Union Station in Kansas City.  I also wrote about Julie Nixon Eisenhower’s campaign stop for her father at a hotel near the Country Club Plaza.  What I remember most was a video appearance of Richard Nixon on a large screen and wedges of iceberg lettuce swathed in French dressing on plates in the hotel kitchen, all equally unpalatable. Somehow I ended up in the receiving line and shook Julie’s hand.  I worried a little at the propriety of looking like a fan or an admirer.  Journalists need to remain objective. Thompson said he always wrote the facts — as he saw them.

While he knew he’d get better stories as an anonymous observer, he didn’t mind shaping the story.  All journalists do that to some extent. We get to know our sources, even want to be stay on good terms with them.   Somehow, even though Thompson often angered his subjects, he still got access.  According to “Gonzo,” Thompson rode in a car with Nixon for more than an hour, chatting about football, because he was forbidden to mention politics or the Vietnam War. I’d be very surprised if Thompson wasn’t on Nixon’s enemies list.  Thompson loathed Nixon, favoring McGovern and making no secret of that.

Thompson shared his notes with Tom Wolfe for his “The Electric Kool-Aid Acid Test.”  Wolfe created his own form of writing, “the New Journalism,” using a colorful, original, involved voice.  Wolfe called Thompson the greatest American comedy writer of the 20th century.  Both men coined phrases that became a part of the language.  They both created trademark images of themselves, standing out in talent and in appearance from the crowd of writers in 1960s and 70s.

Tom Wolfe, 1978, on a street in New York City, in his trademark white suit, which helped to stand out among the crowd of writers.

They couldn’t be more different in style. Thompson was casual, with his sunglasses and dangling cigarette and wearing some kind of slouchy canvas hat.  Wolfe is refined, always dapper in a white suit, hat and cane and white or two-tone shoes.  In November 1987, my husband and I happened across Wolfe in the Boston airport.  Wolfe had been in town plugging his Bonfire of the Vanities.  My husband took the seat next to Wolfe, whose elegant pale cream wool coat was neatly folded in a chair, his white homburg hat resting on top.  Wolfe was like a character in a book from another era, who was keenly and quietly reading us and the others in the waiting room.  I was suddenly very aware of my wind-blown hair and too-casual traveling clothes.   I later read in Bonfire the words of one of the characters deploring the poor state of dress of air travelers.

Perhaps, Thompson would scoff at millions of bloggers besieging the world with their own views, their own experiences, a cacophony drowning one another’s voices. Actually, he probably wouldn’t care.  Some people just rise above the crowd and will always find readers.

When I tell Pat, a friend, about an article I’ve posted or published, she promises she’ll read it — some time, maybe after a long day of work as a pediatric nurse practitioner, after yard work,  after dinner.  I laugh.  She was one of the group of us who’d seen “Gonzo,” and then her husband John encouraged me to write a “gonzo” post.  Gonzo is hard…..

A friend, Jan PlanetJan says that encouraging friends to read your blog feels like “peddling giftwrap for your kid’s middle school.”

Inspired by the title of another movie we’d discussed, Pat says to keep at it.  “There Will Be Blog,” she proclaims.   And, so it continues.

6 responses to “There Will Be Blog”