Leap of Faith in the Wisconsin Dells

I was lucky to get this shot as a German Shepherd makes the leap made famous by Ashley Bennett in his father Henry Hamilton Bennett’s 1886 photograph “Leaping the Chasm at Stand Rock” in the Wisconsin River Dells.

On a recent driving trip through Wisconsin and Michigan, I was reminded in the Wisconsin Dells of how much progress has been made in photographic technology.  Photographers owe a debt to the early innovators, such as nineteenth century Wisconsin photographer Henry Hamilton Bennett.  Bennett originated the concept of photojournalism, invented a stop action shutter (which he called the “snapper”), improved the speed of the chemical exposure process and created other photographic innovations.  His photographs attracted throngs of tourists to the beauty of the sandstone gorges of the Wisconsin River Dells.  (The city of Wisconsin Dells is also now the self-proclaimed Waterpark Capital of the World.)

Bennett is considered one of the top landscape photographers of the 19th century, although I confess I’d never heard of him even though I’ve read a lot of history about photography. So I’m making up for that deficit now.

In 1886, Bennett took his iconic shot of his son Ashley jumping the five and a half feet from Stand Rock to a ledge and back to show how his shutter could freeze action. Ashley had to jump seventeen times before his father thought he had the perfect shot. Some people initially thought the photograph was a trick, because in those days capturing an exposure took a long time, which is why everyone looks so glum in their portraits. They had to stand still, not moving a muscle. Photographic chemicals took a while to react to light. Any part that moved during the long exposure time would be a blur.

In 1886, Ashley Bennett jumps from a ledge to Stand Rock in the Wisconsin River Dells in a demonstration of his father Henry Hamilton Bennett’s new stop action camera shutter. The photograph is called “Leaping the Chasm at Stand Rock.”

When people saw Bennett’s numerous gorgeous shots of the gorge, they swarmed to the Wisconsin Dells, where they could get their own photographs taken as they made the leap. This, after paddling boats to the site, under the direction of a guide.  Eventually, tourist leaps were stopped because of the risk. (Think of the lawsuits!) Now tourists (such as myself) watch a German Shepherd make the leap. You have to be quick to take your own stop-action photograph, because the dog makes the leap only once. I was lucky to get a full-body view as the dog leaped in his return to the ledge. There’s a net below the gap to catch any dog that doesn’t make it, but our guide assured us that no dog has ever fallen. Bennett’s photograph makes the distance from rock to rock look a lot farther. Even so, call me chicken, but I wouldn’t make any leap father than a foot at that height.

Here’s my first attempt to photograph the dog leaping from a ledge to Stand Rock in the Wisconsin Dells. The leap looks scarier in this photograph than in the shot when I captured the entire dog spanning the gap.

There’s plenty more to learn about Bennett, photography and the Wisconsin Dells.   Here are the links. You make the leap.

The Stand Rock photograph was featured in Terrence Malick’s opening credits of his movie “Days of Heaven.” 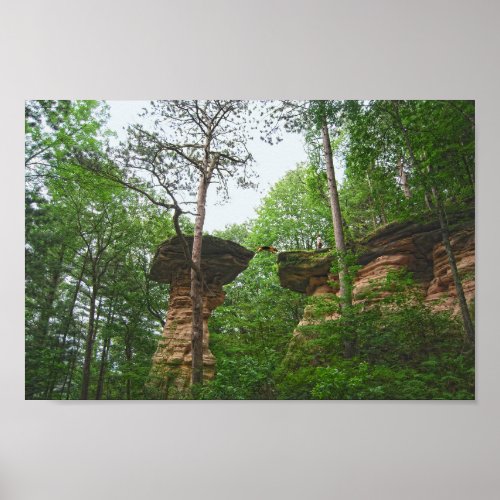 13 responses to “Leap of Faith in the Wisconsin Dells”